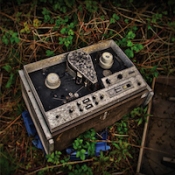 A storm of tiny sounds launched at high velocity in complex patterns form the basis of World Adapter, the second full collaboration between Parallel Worlds (aka Bakis Sirros) and Self Oscillate (aka Ingo Zobel). The duo began with improvisations on modular analog synths, then edited them into the ten finished products presented here. Overall there’s a strong sense of glitch throughout, meted out at differing paces. Even when things slow down, the flickering micro-elements snap by at speed. “Legend Silence,” featuring smoky vocals from frequent Parallel Worlds collaborator India Czajkowska, is a prime example. Her voice floats and coos (and may remind you a bit of Bjork) as Sirros and Zobel launch sonic tidbits into the air. A rich low end gives this track a lot of potency. “Peeled Branches” pulls off the fast-and-slow mix nicely as well. A repeating melodic phrase tucked into the jitter and flow makes for a strong anchor point. In the more uptempo songs, the real pleasure comes in slipping on the headphones and mentally watching these sounds volley across and around your head. “Day 1,” which tonally reminds me of an old Beanfield track, is loaded with tiny effects, clicks and snips at the edge of your hearing, and it’s got a volatile dynamic. “Mental Station” matches its instantly catchy beat with ethereal, science-fiction pads. There’s a nice tempo drop mid-track that the duo effortlessly shift through, coming back up a gear without a bump.

There is a great amount to listen to on World Adapter, and it takes a close listen to catch it all. But even played in the open air, its energy and deft construction are quite attention-grabbing. The melodies that Sirros and Zobel build beneath their frenetic modular expressions are soft and redolent of classic EM. The energy is unavoidably engaging. I worried that the glitchy construction would be a bit of an overload, track after track, but after many willing repeat plays, I just settle in and enjoy the quality of the work. There’s good chemistry here, and it’s a pleasure to delve into.