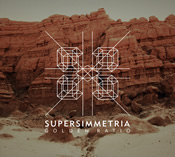 Taking off from an oddly abrupt start that had me worried about the condition of the road ahead, Supersimmetria’s Golden Ratio delivers a mix of dark-industrial grind, glitchy rhythms, and deconstructed music-class musings. The disc purports to be about the effect of rhythmic and arhythmic elements working in unexpected ways and blended into spacious sounds. To the listener this comes out as interesting cross-rhythms punching their way through sound forms that build to palpable thicknesses. The formula tends to be: start with a simple phrase or sound, repeat and layer, weaving complexities and loops, and allow the thing to gain mass and impact. “Still Thinking About the Law That Regulates the Universe” and “Structure” build off piano motifs. The first uses a base of two notes, paired with little flourishes, to set the tone. Those two notes work as anchors as the sounds load up, before disintegrating toward the end. The other is played as a charmingly stilted set of notes trying to hold  their own focus as a snarling electronic sound forces its way in to change the feel. Golden Ratio revels in its grittiness, and its strongest moments are where it takes that to a high level–the distorted washes and pure industrial metal-on-metal pounding in “Atmosphere,” or  the tinkling glitch and old-school electronic feel of “Descent.”

All in all, Golden Ratio is effective and powerful. It’s going to appeal more to those whose tastes run toward, but entirely into, noise. The glitchwork here is excellent, and there’s a lot of thought behind how things are constructed. A good higher-volume listen.