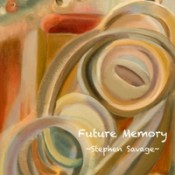 It’s interesting. Stephen Savage says that with Future Memories he wanted to create synthesizer-based spacemusic. If that’s the case, then this is the jazziest, least spacey spacemusic I’ve ever heard. He finds his way there by the time he reaches the track “Gravity”–and he manages to all the right memes with his big, sweeping pads and glittery sounds–but even that winds up with a jazz tint. And that’s okay, because Future Memories is a comfortable ride that finds its voice in its blend of jazz, laid-back New Age, and a hint of spacemusic. The jazz element is strongest, and Savage, whose credentials include stints with both Berklee College of Music and the New England Conservatory of Music, is clearly at home there. “Then There Is Here Now” sounds like what would happen if Steely Dan decided to go a bit more prog. Fagen-esque breaks and phrasing mark the spaces between tweaky arpeggios that scurry up and down the scales. Savage also unfurls some tasty guitar licks here (and throughout the disc) for extra zest. Michael O’Connell’s rock-solid drumming adds flair and power. “Hold That Thought” carries echoes of Lyle Mays in its crisp and lyrical piano. “Riding the Cusp” spills out filled with electro-jazz funk, its Return to Forever keys underscored by percussion from O’Connell.  This track will do your soul some good. Savage’s ambient-leaning pieces are equally well executed. “Ponder” and “Lux” float right along, with “Lux” adding in a little extra dramatic flair.

Firmly slotted in the New Age category, Future Memory‘s jazz pedigree makes it a nice wind-down disc, with the electronic edge bringing in a lot of dimension and room to play. Jazz fans will find themselves playing the name game as they go along, but Savage makes each piece his own and everything here is rock-solid. Very enjoyable.