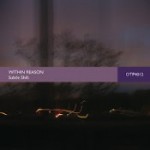 Within Reason is a side project of Greg Kyryluk, who first established himself under the moniker Alpha Wave Movement and later as part of the duo Thought Guild.* As AWM, he focused on deep spacemusic; Thought Guild was more of a Berlin-school-influenced outing. Recording as Within Reason, Kyryluk now takes on a form that retains a very solid ambient base, but also puts focus on slowed, understated rhythms and an ear-pleasing touch of dub echo. What works best on Subtle Shift is the way Kyryluk keeps his beats truly subdued–call them subdermal. Often they’re no more an a gentle tapping keeping cadence under the laid-back flows, but they’re always distinctly felt. Kyryluk’s main grooves here retain  a spacey, wide-scope feel, but also take on a lounge-like quality that meshes smoothly with the beats. The dub influence is at its firmest in the cool pulse of “Bodhi.” Rim shots snap and echo, ricocheting back and forth across the headphones. Kyryluk lays in some tasty bass as well. Crickets and light touches of glassy chimes fill the space. Great track. For pure, mind-salving cool, find your way to “Nimbus.” Big, spacemusic pads ease along over a tick-tock beat phrase and a slowly moving chord phrase. Kyryluk builds the intensity just a touch, but always keeps it reined in. “Liquid Language” where Subtle Shift hits its most upbeat feel. Of all the tracks here it reminds me most of AWM, with a little extra touch of groove that comes from a solid lounge overtone. Every track on this disc has its own distinct groove, and everything comes off cool and confident. It’s just a pleasure to drop into; Kyryluk is definitely in his element here. A superb release.