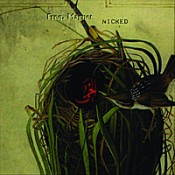 Sound doesn’t stand a chance once Freq.Magnet gets his hands on it. It will be twisted, morphed, overlaid and overlayered and pulled, putty-like, in endless directions and permutations to create the deep, odd semi-ambient that is the signature of this side-project by one half of renowned ambient duo Austere. On Nicked, all of those sounds are guitar-based. Heavy looping and processing render them down into new tones which Freq. likens to Stars of the Lid and Windy & Carl. The disc is split into two “sides.” One takes simple, repeating three- or four-note patterns and drives them into each other to create dense holes of tone; the other leans toward “shoegaze sans vocals [and] short bursts of heavy guitar freak-out.” (See the one-minute burst of “Massive Riffage” for a fine example of the latter.) The flow from one side to the next, and from one feel to the next, is smooth. “Chuchotement de Quatre Notes” finds the guitar at its most recognizable, the crisp and simple scaling notes sent skyward against a windy wash of background sounds. It slides into “Pelates,” which reminds me of the Austere track “Morning Glory” with its plucked notes spinning off in echo, each new note adding to the growing cluster. The aforementioned “Massive Riffage” makes a cool, unexpected-yet-effective bridge between “Quiet Song #3,” which is like a slightly fuzzier version of “Chucotement…” and “Divebomb,” which begins a stretch of drone-based guitar musings. (Save for the 37-second sound clip from the old “Prisoner” TV show.)  This 35-minute stretch wends its way through distinct takes on the style. “Divebomb” spirals concentrically around itself, an expanding presence of sound. “Avoirdupois” is a soft ambient flow that gently grows in intensity, punctuated with intermittent string melodies that hearken back to the beginning of the disc. “Wallowsound,” the longest track, takes a somewhat harsher approach, its sounds roughened around the edges and deliberately grating. Wailing guitar loops rise up in the background to push the borders even further into the experimental. Something in its structure suggests a lost and wandering post-rock song that’s gotten caught up in the churn. And then there’s the final track… There may never be a cooler cover of The Who’s “Behind Blue Eyes” than the one that closes out this disc. Along with Portland-area band King Black Acid, Freq.Magnet lays down a thickly echoed, slowed-down and tripped-out take on this classic. (See if your ears, like mine, hone in on the sudden splashes of late-era Lennon/Beatles guitar sounds in the back.) Six minutes of pure cool self-indulgence. Nicked is a varied and enjoyable bit of playing with sound. There’s a lot to hear, so listen to it often.