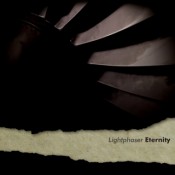 Lightphaser’s “new” release, Eternity, is actually a batch of remixes from his 2009 release, Flashback. Having not heard that, I can’t review by comparison. What I can offer is that right from the gates Lightphaser (aka Joseph Gogh) cranks out energetic, club-style EDM tracks that, for me, rapidly lose what luster they might have. Punchy electronic blips bounce and collide in a fairly predictable fashion and offer nothing new or groundbreaking. I’m four tracks in before something really catches my attention–which is to say, I don’t forward past it. “Falling Horizon” has a good 90s feel to it, an electro-pop beat that gets the toes tapping. It borders quite dangerously on becoming stagnant for its near lack of dynamics, but narrowly avoids that fate. The closer, “Deadlock,” is the only track that comes close to shunning the overarching coat every other track here wears. Slow-moving at first and reasonably dark throughout, it breaks into a complex sequencer groove that shifts gears to pass through an old-school-style, oscillating-waveform space and into a nice mix of modulations. For most of the disc, however, Eternity is a miss for me.