Anyone who’s seen an ambient/electronic musician perform live would probably admit that aside from the visuals typically splashed across the space during the show, there’s not a whole lot to see. The artist hunches over a couple of laptops, lays hands on a keyboard now and then and, if you’re lucky, might break out a guitar or a didgeridoo. The upside of this is that it allows you, the listener/attendee, to drop into the sound and focus more deeply on the movement and evolution of the music as it emerges and develops, free of worrying that you’re going to miss a power-chord knee-slide across the stage or a massive eruption of pyrotechnics. You can be more deeply involved in what the music’s doing to you. 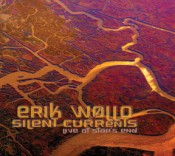 It’s that practiced sound-evolution and captivating narrative flow that marks the two concerts captured on Erik Wøllo’s two-disc release, Silent Currents. Recorded in 2005 and 2007 at the WXPN studios during broadcasts of the Star’s End show and immediately following live shows at Philadelphia’s renowned The Gatherings concert series, Silent Currents benefits from Wøllo’s post-concert momentum and the kind of flowing creativity that hits when you’re still performing at around two in the morning. Wøllo builds his sets from pre-established/pre-programmed grooves and soundspaces, then augments them with improvised passages.

Disc One opens in a strong ambient space, Wøllo paving the way in bold drones that build in thickness before settling back to a more open space. Five tracks in he subtly folds in a beat that bubbles along in the flow and the timbre of the piece begins to shift. A gentle melody replaces the drifts and Wøllo brings in the sweet sighs and cries of his signature guitar work, high notes that pair off against the pads. In track eight Wøllo brings in, for lack of a better word, church organ tones that play humbly over wavering synths. It’s another of those evolutionary moments that absolutely seize your attention without disrupting your personal place in the drift.  Track 11, although only two minutes long, is another, adding a potent pulse with the arrival of big, aggressive drum beats that ramp up the moment before Wøllo again lets things slide back down to a quiet, cleansing finish.

Disc Two opens in a darker space, shadowy and slow-moving with things lurking at the edges. Guitar shimmers and tinkling chimes drift in to lighten the space as Wøllo opens the scope of sound. Insectile analog skitterings, familiar to anyone who’s listened to Steve Roach lately, take over, making their tracks across softly rolling pads that rise in intensity to mark a new passage. Wøllo moves into a softly rhythmic zone with track four, and lets the guitar come forward. Around track five Wøllo takes us back into the darkness, heightening the gloom and unease across the next couple of tracks. By track seven it’s all around, a perfectly shadow-encased atmosphere that moves slowly forward. A guitar line in track eight accents the emotion, picking its way with sinister aspect through the fog. Here again is an example of Wøllo’s artistry; slowly the tone lightens and we emerge into a broader space, the guitar rising and brightening and the whole of the thing simply shifting to present a new vision–seamlessly. The transition is amazing. Meanwhile, back to those attention-grabbing moments–the short track 11 introduces a fresh electronic sound, like raindrops on guitar strings that, having done their job in basically introducing the last stretch of the disc, fade to make way for long pads. Wøllo closes out pairing the guitar with the sound of lapping water. A smooth analog rhythm comes up from under to energize the space. In the last five minutes Wøllo floats long, quiet pads through the space and, with a light hand on the controls, dusts them with disparate and contrasting sounds that fade to a final hushed sigh.

The concerts were just two years apart and Wøllo has a very distinct sound and approach, so the two discs can feel a little similar in places if they’re listened to back-to-back. But both are so smooth and elegantly constructed that similarity become a less-than-minor consideration. Taken as a pair of hour-long sonic moments in time they’re perfect ambient-music listens, exemplifying what one guy can do when he’s hunched over some laptops with a guitar. Not a lot to see, but very, very much to hear. Wøllo is a master craftsman and Silent Currents shows him at his best. It’s a Hypnagogue Highly Recommended CD.