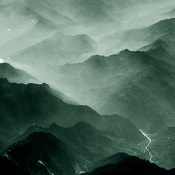 Three brief sketches covering about 20 minutes make up Namkwan Cho’s Green Mountain. It kicks off with a bit of an abrupt start on “La Belle Dame Sans Merci,” which quickly ramps up into a buzzing wall of distortion. It’s like Cho took the latter part of a post-rock song, that point where everything is big, slammy chords, and turned the levels up. (On the artist’s Bandcamp site, this mantra is posted: Build, repeat, decay.) “On Silent Haunches” sets up a three-note phrase that’s a bit like a large clock chiming the hour, then surrounds it with its own resonant sound. It’s rather static outside of the constantly growing backdrop, and I have to confess that the phrase wears on me before the track’s half over. The title track is the best of three, working off a guitar phrase and again laying on distortion and light noise washes. Again, it helps to like the repetition that comes with a minimalist mindset.

Green Mountain is a snack bite of Cho’s style and it doesn’t raise much more than a shrug from me. I understand what’s going on, it just doesn’t grab my attention as much as it should. There’s enough fuzz and distortion to go around, but the over and over nature of the underlying structures leave me cold.