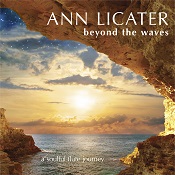 If I could, I think I would lightly rearrange the order of songs on Ann Licater’s lovely new album, Beyond the Waves. With Licater’s flawless flute work front and center, surrounded by small, intimate accompanying combos, the album develops a vibe that’s laid-back and calming while also drawing vivid imagery. For me, less is more on Beyond the Waves. In my imaginary song lineup, the album would open with the beautiful solo sounds of “Sunrise Blessing.” At just two minutes, it’s bright and inspiring, showcases Licater’s fluid, soaring style, and would set the tone very nicely. “Blossoms Falling” spins quietly out like a flute haiku, accompanied by guitar from Dan Ferguson and bass from Peter Phippen. I like the way the accompaniment takes small steps, laying down bits of phrasing that play out across time as the flute flies ahead. “Island Garden” pairs the flute with acoustic guitar and light taps of hand percussion, courtesy of David DiLullo on Peruvian cajon, in a smooth, upbeat dance. The piece that follows, “Sailing On Moonlight,” is a graceful duet with piano from Ferguson, softly underscored with more of Phippen’s bass. If the track listing was up to me, I’d end my “less is more” section with the stunningly soulful “Song of the Willows.” It’s flute, wind chime tones, and nothing else. Just this wonderful, Eastern-inspired song where the flute leaps and spins, each note rising in vibrant color to paint the air.At this stage of the review I am going to admit to you how much I have revised and revisited my opinion of the two opening tracks on this album. Initially I did not care for “Rhythm of the Stars.” It struck me as too filled with New Age-ness, maybe even a little too bright and dancing when compared with the subtler pieces that come later. But the more I listened to it and the deeper I looked into it, the more it grew on me. Ferguson’s acoustic winds a thread of melancholy through the piece, stepping back when the vibe turns brighter. Phippen catches a jazz glide on bass, and DiLullo’s djembe work anchors it all. I hear echoes of the Windham Hill combo Nightnoise in the song. I also like the folksy, honest tones of “Halcyon Morning,” but again feel the need to note that I like it less than the rest of the pieces. Ferguson handles both piano and guitar here, while Phippen keeps the beat on conga. A touch of synth strings lend the background a sophisticated feel.

The order of tracks is probably the last thing I should be commenting on here, since Licater notes that “Each track is carefully placed in an order that supports a 55-minute, ‘traveling meditation for well-being.'” And Beyond the Waves does, indeed, flow superbly from start to finish. For me, having listened to a lot of Ann’s work, I guess I tend to prefer her amazing playing when it’s left to its own devices as much as possible. She calls her music “flute for the soul,” and my soul generally agrees. Beyond the Waves should easily find a slot among your favorite New Age albums. An excellent addition to a superb catalog of work. I’m always glad to see a new Ann Licater release in my mailbox.

Available from Flute for the Soul.