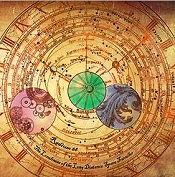 Allow me first to confess my love of Radium 88’s signature sound. On their website they say—and I love this—that they wanted to “make music that sounds the way William Gibson reads.” Sum it up thus: sad piano melodies, doses of doppler, electronic backdrops, house beats where they’re needed, and the heartache-laden voice of Jema Davies telling us stories. Put these together in manners that vary really only slightly, toss in some raw guitar now and then, and off we go. The Loneliness of the Long Distance Space Traveler serves up fourteen helpings of this sound and style, and I have to say that while I enjoy the whole ride, it really stands out for me when Tim Thwaites busts out that guitar and starts cranking. He hits it first on “Who Will Save Us From The Waves,” when a big crunch of distortion-heavy axe roars up out of a sequencer line. It wails like a banshee with a microphone and the sound just envelops everything. He dials it back after its solo, its held notes more easily underscoring Davies’ voice. On “Renunciation Blues” we’re greeted with the syncopated bop of a reggae keyboard line before Thwaites walks in his sharp, rock-attitude guitar lines. There’s a nicely orchestrated tempo shift later that ushers in some bad-ass slide work. Thwaites absolutely rips it up briefly, creating a “What was that?” moment that may have you going back for an immediate repeat listen. It wails again in “The Girl Who Outshined the Void,” playing off thick bass and multiple sequencer lines drawing a crosshatch over the sound. On both “The Lost World of Tomorrow” and “This Too Shall Pass,” it goes heavy on the tremolo, cutting wavy lines in the air like shutters. But it’s not all about the aggressive axe work here. As always, there are passages of quiet reflection that ride more directly on Davies’ fluid choral recitations. “Heavy Water, Falling Stones”  is a longer piece (most of their work is pop-length) with a pastoral quality at its outset. It dials up into an easy groove with string pads, plenty of dopplering, and another great guitar solo that has a big alt-rock feel to it, although it’s set off into the background for a nice balancing touch. “Nocturne 7” is where classically influenced piano meets muted electronics in a genuinely beautiful mix.

The Loneliness of the Long Distance Space Traveler is the most assertive, raw album I’ve heard from Radium 88, and I quite enjoy the changeup. There has always been a guitar element to their sound, but never quite like this. It not only adds a fresh energy, but it makes for very interesting textural matches and shifts where you go from 60 to 0 in a beat. I enjoy those moments. Davies’ voice is what hooked me on the duo early on, and she’s in very fine form here. This feels like an invigorated Radium 88; I know they have returned to playing live as well, so grab hold of this burst of energy now. It must be said that the duo’s formula is very much on display across these 14 tracks, and some folks may find this album shines more when it’s mixed into a larger flow. I always like to take my R88 full-on at first, then later let it show up to surprise and delight me with this sound that I’ve come to love. Check this out now.

2 thoughts on “Radium 88, The Loneliness of the Long Distance Space Traveler”