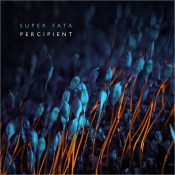 Please be patient after pressing play on Super Fata’s Percipient release. On the first track Jan Roos takes a full minute to bring in his sounds, taking them from a barely perceptible whisper to, well, a slightly more perceptible whisper. It sets the tone for this drifting, deep, and often dark listen, and lets us know we need to be paying close attention to the many small sounds at play. This is a quiet journey, for the most part, but one that is still very dynamic in its intricacies. Roos’ slow-moving structures, built on electronic-wind foundations and a broad sense of dimension, almost feel like a slow pan through a highly magnified landscape. Given the cover image, along with song titles like “Mycellum” and “Cordyceps” (yes, I had to look it up), referring to types of mushrooms, I feel I’m not entirely wrong—we may very well have been shrunk down and are now looking at the structural complexities of natural life from a wholly new and alien perspective. That feeling, the idea that we’re someplace strange, comes through intensely on the combined flows of “Protoself” and “Mycellum.” This is an excellent stretch, the sounds dark and uncertain, the plink of water drops suggesting we’re in some dank place as we try to find our way along. The subtle rumble of the low-end sounds intensify the visceral quotient of the  atmosphere Roos creates. “Mycellum” is borderline dark ambient, its voice consistently low and windy, the space around it filled with tiny insectile sounds. One of the great touches on Percipient comes when “Psymbiosis” throws a cool curve into what has been a beatless flow by offering a rhythm that rises up out of the dry, rattling sound of shells or seed pods. It’s not a huge uptick in velocity, but its laid-back vibrancy and easy groove are a cool wake-up call. Plus, it’s functional, because it fades into the title track, and that’s going to take you as deep as you can go on Percipient. Drone aficionados will find their bliss in the metaphorically immeasurable depths of this 31-minute piece, which builds from a quiet place to eventually turn into a mass of stormcloud drones that hover and slowly descend. By the time you’re in the middle of it, with its low end growling with soul-wobbling resonance, it has become your atmosphere. Within its swirl, more small sounds craft an expanding dynamic, and Roos drives it to a blistering thickness that rises in intensity. It’s compelling. There’s just one bump in the flow for me on Percipient. The squeaky little sounds that pepper “Membrane” bothered me at first. They seemed out of place and intrusive, considering how far down the album has taken me by the time this track arrives. Same goes for the crackling static that comes in later. The crackles bother me less than the squeaks, but I feel like I could have done with one or the other. Both? A bit distracting—which is unfortunate in a release that has truly captivated me. It’s a small quibble, and if truth be told, I’ve somewhat gotten over my objection to it, but it still pulls me out.

Percipient is a very deep release, and headphone listening is very much a must. Roos is dialed in to how complexity works, even in the more minimal confines of drone, and his layering is a pleasure to dive into. Prepare for a deluge of sonic imagery and visceral response, and take your turn exploring this very good release.