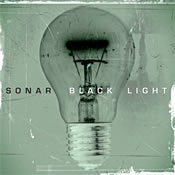 Hello, math. I mean the equations, algorithms, and conceptual thinking of prog rock. Once you’re about a minute and a half into the first track from SONAR’s Black Light, the notes start getting algebraic, multiplied by funky time signatures and raised to the power of King Crimson. From there the numbers remain fairly the same with a few variables thrown into the mix, and if you’re very into a Fripp-esque angularity and complexity, you’ll likely devour this album. Guitarists Stephan Whelan and Bernhard Wagner trade licks and leads while Christian Kuntner on bass and Manuel Pasquinelli on drums form a tight rhythm section. Much of the album sticks to a similar pace, relying on technique rather than pyrotechnics to try to hold your attention. “Enneagram” ramps up slowly, and is constantly in danger of seeming too static. It runs nine minutes, and spends a lot of that on large chunks of repetition. The way the individual lines are brought together is interesting, but not for all nine minutes.  The title track kicks off with a bit more energy, but soon falls into the same situation. I know that there’s higher compositional thinking at play here and I might be missing some subtleties of music theory, but by mid-track I find myself wishing they’d get on with it. “Orbit 5.7” makes for a nice departure, slowing the pace down further and bringing the jazz feel up. It’s a carefully metered piece, mostly lacking flash but making up for it in the super-tight adherence to its crisp underlying angles. It’s like an exercise in how intense the ensemble can make something without straying too far from a distinct line of thought. One thing that stands out for me on Black Light is the way Kuntner’s stalking, bestial bassline puts an incredible amount of weight into the closing track, “Critical Mass.” Late in the track he uses it to set up a pulse-like thump and has a conversation with Pasquinelli—but again, as much as I like the moment when it arrives and although it does change up as it goes, it wears out its welcome.

For the most part, I do like what I hear on Black Light. It’s well-made prog with a heavy jazz lean, but I become too aware that I’m hearing similar structures over and over. Thelan and Wagner rely heavily on a Morse Code staccato that works decently enough in any given individual track, but when it’s happening track after track, it wears thin. Dig in, do the math for yourself, and see what you get for an answer.