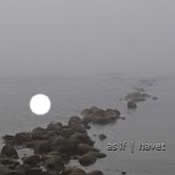 As If (aka Kenneth Werner) is back with a pocketful of dub influence to mix with laid-back, borderline ambient constructs on Havet. I like what I’m hearing here, but I’m surprised at how soon it excuses itself and recedes into the background, and never seems to come back forward much. Werner sets his keyboards to a sort of wah-wah tone, puts the drum track on “Bass” at the requisite BPM, and plays a bit. This is not to say it’s not pretty good. The overall tone is warm and soft, the beats work their way into your system, and the casual vibe is nice enough. I want this playing while I wind down with a cocktail, but perhaps laced in with other music. The 12 tracks on Havet cover an hour and 20 minutes of music, and the tone doesn’t change much at all. (Though I do like the pulsing sequencer work at the core of both “Klippe” and “Tågen.”)

In thinking about Havet, I’m reminded of how Earth is described in The Hitchhiker’s Guide to the Galaxy: “Mostly harmless.” Havet is not going to challenge you and it is not going to insist that you listen to it at any point. Given the chance, it will do its job, which is to chill you out, when it’s blended into other music. Werner knows his way around the downtempo format; it’s just that here he hasn’t chosen to do much with it. Have a listen, form your own opinion.

Available from The Lost Gterma.