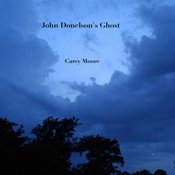 When I reviewed Carey Moore’s debut release, Trout Ribs, I noted that while I liked his style overall, the work there seemed somewhat thin. Given the number of times I have found myself thoroughly lost within the pieces on his latest outing, John Donelson’s Ghost, it’s safe to say he’s overcome that issue. Most of the work here falls into a hold-and-release motif, with long tones and pads meditatively breathing their way along and weaving through each other, accented with sonic textures. From the quietly hymnal quality of “East Cumberland” to the dream-soft haze of the title track, these moments are the pure heart of this release. In fact, when after the first two tracks “Clover Blossom” comes along with dingly chimes and electric piano notes, I’m a little taken out of the flow. It’s not a bad track, although the chimes get a little sharp for me, but the more amorphous, hushed material is so much more compelling that I just want it out of the way. I would rather have more of the warm-mist surroundings of “Lincoya” or even the slightly more active pulses of “Working Alluvial Fields.”  The latter takes on a nice spacey feel and twists slowly into an easy, hypnotic wash. “Mending the Rain” builds from high, breath-slowing drones reminiscent of Roach’s quieter works. Moore uses dimension well here, adding textural sounds at the periphery for a waking-dream sensation.

In my opinion, John Donelson’s Ghost takes a solid leap ahead in quality from Moore’s debut. Quiet music fans have plenty to dig into here, and other than those couple of places where it raises its voice, it makes for a great background listen.  All in all, a good outing from Carey Moore, and a release that hints at more good things to come.