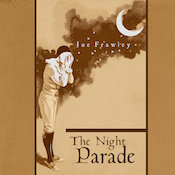 After many albums that explore a kind of voyeuristic borrowing of other people’s memories and moments and lacing glimpses of them through haunting melodies, Joe Frawley simplifies the situation just a bit on The Night Parade. Frawley takes his cue from characters in the commedia del’arte, and relies more on the sound of his piano than on the melancholic atmospheres he typically creates out of snippets of sound. Still, we do not lose the adjective haunting here. In his selection of keys, in his reliance on weighty, resonance-packed pauses, in his echoing production, we still find ourselves peering into a place we were perhaps not meant to see. “Pantomime” is one of three tracks born out of improvisational sessions between Frawley and guitarist Greg Conte. This is “classic” Frawley, his piano lines cut at dangerous angles and showing a propensity for jazzy flairs while pieces of singing (either from frequent collaborator Michelle Cross or soprano Kay Pere) spin around the room. “Speak, Columbina” is another piece that uses a standard Frawley trope: fraction-of-a-second long snips of a hesitancy in speech, of the breath between words that captures the beginning or ending of something spoken, paired up with eerie runs on strings and more of the jangly piano. Where The Night Parade differs and shines is in those places where Frawley sits mostly alone with his piano. The title track trills forth its first few notes sounding very New Age. Only the lightest augmentation accompanies it, a whisper of harmony. Again, there are moments where a hint of the jazz rolls in like a wave of pleasure. Subtle cooing from Cross rounds it out. “Pierrot Dies” is played like Frawley is figuring out where to go. The notes come in sudden rushes after meaningful pauses, an urge to say something. The sound is clean, unadorned at the outset, and appropriately sad.

Frawley’s work is always washed through with touches of remorse and isolation, but it’s not off-putting. It’s personal, and it’s something that is somehow easy to internalize. The music is his; the feelings are yours. And here, where you are not being ushered through landscapes constructed of cast-off pieces of other peoples’ stories, what you hear during The Night Parade is entirely your own. Beautiful work as always from Mr. Frawley.