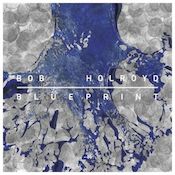 On his website, Bob Holroyd doesn’t say much about his latest release, Blueprint. No worries. This music speaks for itself, and does so in several different and equally effective voices. Thus, the album becomes a showcase of Holroyd’s many sides and sounds, from thoughtful jazz takes to hushed ambient. There have been times I’ve listened to this on loop across the course of a day and, distracted by the mundanity around me, actually forgotten to whom I’m listening. I’d hear an intriguing track and when I checked, well, yes, I was still listening to Blueprints. The diversity is that strong, yet when you sit down for a straight-on listen, it doesn’t feel scattered. Having known Holroyd mostly as a quiet ambient guy, I was quite taken with his jazzier pieces. He’s assisted by trumpeter Kevin Robinson, whose laid-back lines put me in mind of Mark Isham. “Sometimes” finds him launching high notes over Holroyd’s surprisingly gritty guitar and a bed of soft chords. Then, when the sound dials down, the trumpet smoothes out and seduces. The title track has a small-combo feel, with an easy beat on drums and the addition of rich cello draws from Peter Gregson. Robinson drops in after a break, and it’s like a light dusting of chrome over an already beautiful sculpture. Holroyd brightens the background in places with the unobtrusive addition of a quick sequencer pattern. On the ambient/quieter side, “The Unseen Scars” is a lovely example. Twinkling notes shine over pads and Gregson’s cello. Right after, “Opal” slips in with a drawn-out melody. Acoustic guitar gives it a homey feel, with Holroyd letting his fingers slide lazily between chords. “Flow” matches bright sequencer tones in a patient rhythm with a slow-motion trumpet from Robinson. It’s a very comfortable piece, and charming.

Holroyd packs 14 tracks into 47 minutes here, but you’d never know it was that comparatively brief. You spend the time completely pulled into the sound and that warm immersion seems to just go on. Because of the mix of styles, Blueprint is just a good shuffled up as it is straight through. One of my favorite releases of the year, it keeps drawing me back in for just one more listen. Go hear for yourself.