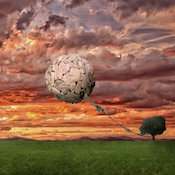 You will know in pretty short order whether or not Jason A. Mullinax’s sonic stew, Home World, is for you. This “collection of moody electronic space excursions featuring cut-n-paste aesthetics, swirling synths and moto-kosmic drumming” leaps out at you from its first moment with a bewildering jumble of sounds and a mad blast of energy. It dances in front of, perhaps a bit spastically, with a look at me! bravado, and depending on who you are and what you like, you just might find yourself settling in and saying, okay…let’s see where this goes. And where it goes is a bit of everywhere. The more I dug into Home World—which is to say, the more I willingly gave in to its deep weirdness—the more I found to quite like. It helps to like percussion, because there’s a lot of it here, but it’s not ramped up throughout. “Hello, Human!” is driven by a crazy beat that matches the springy, cartoon voice at its core, but the follow-up, “Shadow Box” is built on reverse-echo sounds that rise and expand like bubbles in water. A pulse rather than a straight beat marks out a sort of staggered waltz tempo. “Harm Game” is another beat-based piece, with a world-music feel that comes from clattering sticks and drums. Big chords, a repeating phrase in high synth notes, and a distorted vocal add extra energy. “Strange Hours” features a drum riff that has a cool, slightly sloppy feel, like some guy kicking around on a small kit in a garage somewhere just to get the urge out of his head. Around it, Mullinax builds a dissonant, pad-based atmosphere packed with all manner of odd little sounds. If there is such a thing as post-electropop, “Octopus Tree” would fit that bill. A swirl of bright sequencer lines dance around a bass-drum-heavy beat. I like the drums here for the fact that they lay out a very straight 1-2-3-4 beat and every fill is just hit every drum in order from snare to floor tom. Without meaning to sound insulting, there’s an interesting amateurish edge to its simplicity—and don’t get me wrong, I like it. The  track that closes the album proper (before bonus tracks) is a nice bit of surprise. “Goodbye, Earth” gives us hand percussion, wobbly wavering keyboard tones, and the comforting rasp on fingers on acoustic guitar strings. It’s very low-key and smooth and shows a side of Mullinax I’d love to hear him explore in a later release.

So Home World can be edgy, it can be frenetic, it makes the occasional hard shift of tone (give “Soft Landing” a listen), but there’s a lot of great structural work at play here. Even at its most tangled, it never sounds or feels gratuitously so. On top of that, it’s just fun. (As I write that, I am swaying to the tribal-ish drums of “Space Amish” with its dum doh doh doh vocals.) What the heck—I think I’ll go listen one more time.