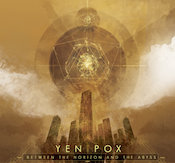 What if I told you that there was a dark, industrial-edged album that actually manages to be sort of…soothing? You could take my word for it, or you could just delve into Between the Horizon and the Abyss, the long-awaited new release from Yen Pox. There you’d find an hour’s worth of big, dense masses of sound and sensation that, okay, might not soothe so much as hypnotize, but at the same time, they’re not out to crush and depress you. Michael JV Hensley and Steven Hall craft an accessibly grim, decimated world to take us through, a place that is at once desolate yet populated with ghosts and decaying machinery. Sandstorms of sound rise up and rush in to create the album’s harshest moments. “Grief Ritual” is one such spot, perhaps more effective for the way it comes out of the almost brighter, more ambient tones of “In Silent Fields.” Rolling in on growling bass pads and an effective pairing of industrial chugging and the squeal of tortured metal, “Grief Ritual” hits a point just to the able-to-breathe aside of isolationist ambient. We hear lost voices calling at us from the distance. And when it relinquishes its hold, you feel it. However, where it deposits you is in “Ashen Shroud,” which features vocals from Dark Muse that ring of singing a best-forgotten ritual. There’s excellent texture work here, and echoes that give the feeling of being in some underground place, a place we shouldn’t necessarily be but we can’t help looking around. I close my eyes during this track, and just let the sound do the painting for me. That’s perhaps the best description I can give of what happens when listening to this album: you reach a point of surrender and, dark ambient or not, you just let it finish showing you around. There are elements of grace and beauty lurking here, patiently awaiting your acceptance. They know you’ll get around to it. There’s a lot of tasty stuff happening here. “White of the Eye” opens with a rip of viciously distorted guitar and sounds like it’s about to break into an industrial rock melody before it just scatters itself across the wind. “The Procession” screeches at you and there’s another of those voices always just out of reach behind the caustic rasp of sound—what if it’s telling you how to get back? What if it’s lying to you? Yen Pox crank the density on this track, surround you in the sound and obscure your connection to the world. When they ease the pressure, you’re left with bass pulses puddling around you and everything is fading…for good.

Waxing a bit rhapsodic about dark ambient might seem odd, but it’s to Hensley and Hall’s credit that their work implants these kinds of visions, these feelings and stories, straight into the listener’s head. It’s easy for dark ambient to straight-arm a listener or to have to goad and dare them into listening. But really good dark ambient entices you to listen by appealing to some questionable urge hiding in your soul, then holds you there with a combination of hypnotic influence and well-crafted sonic narrative. The Yen Pox Bandcamp page says it’s been 15 years since the duo’s last full-length release. While it was clearly tell well-spent as far as crafting an excellent album goes, I would like it to not be another decade and a half before they get around to having their way with my mind again. Dark ambient fans will devour this; even casual listeners looking for an intriguing change of sound should strap themselves in and take this ride.