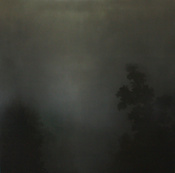 Okay, now I’m sad. But it’s the good kind of sad, because it’s, like, beautiful sad. I have come through yet another listen to the self-titled release from The Lonely Bell (aka Ali Murray), and I’ve gotten really pensive again, and darkly calm, and as I emerge from this half hour of softly murky drones, its truly gentle weight lifts away. This isn’t the kind of weight you get with dark ambient, but it certainly swaps that out for emotional weight. The majority of the impact comes from the stunning-yet-simple closing track, “Frozen in Memory.” Prior to that, the title track opens the disc with long, beatless drones that, although not deeply layered, exhibit a very pleasing slow-motion dynamic. The most forcefully present of the drones remains nicely constant in the foreground; the movement happens quietly beneath the flow. On “Winter Curse,” Murray laces in guitar over what may be a field recording of wind. (Murray records on the remote Isle of Lewis off Scotland.) That sound imparts the requisite chill, and the guitar’s uncertain steps convey a meandering loneliness as it finds its way into a melody. The transition is timed beautifully, and the balance of sounds shifts accordingly. The quick track “Withdrawal” follows, another play in drones, this one built on a warbling sound looping before fading off into wind. This makes for the changeover into “Frozen in Memory,” and the deepest stretch of the album. The equation, on the surface, is simple: a slow, sad post-rock song, played quietly over a base of drones meets a rising electronic crackle that patiently obscures everything else. The track is 10 minutes long; the crackling starts at the two-minute mark. How Murray manages to not piss me off with this sound in the next eight minutes, I have yet to understand. Instead, I find that I am falling deeper into it, getting lost in this static-filled snowstorm, using the whisper of the song as a guide. The feel of the thing, and maybe the combination of feel and the eventually hypnotic effect of the noise, absolutely hooks me and I don’t want to come up out of it. A very effective piece.

This short release marks an excellent start for The Lonely Bell. Although it begins a bit on the thin side, by the end, Murray has shown a lot of skill with an understanding of drone. I’m looking forward to more. Have a listen, and at the very least treat yourself to “Frozen in Memory.”

Available from the artist’s Bandcamp page.