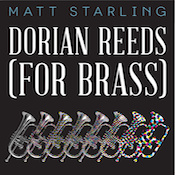 Perhaps if it weren’t for minimalism’s ability to mesmerize with its abundance of repetition, Matt Starling’s all-flugelhorn rendition of Terry Riley’s Dorian Reeds might come off as, well, annoying. The blame here, what little there is, lays entirely with Riley, not Starling. You will need to be firmly in the “I love minimalism” camp to enjoy, let alone get through, this composition. That being said, kudos to Matt Starling for taking this challenging work, originally written to saxophone and tape delays, and transcribing it for brass. (Not to mention raising the backing for this release on Indiegogo.) Computers are used to approximate the effect of the delays, and Starling recorded large amounts of the individual modules that make up the piece before editing it into the form offered here. The structure of Dorian Reeds is built from increasingly complex loops of those modules—phrases, as with Riley’s In C—that the musician plays, only to have them spat back at him almost immediately by the “delays,” creating a sort of duet (or deeper, as the sound goes along) with himself. The layers of repetition turn into drones and the drones turn hypnotic, but more often than I might prefer, there are sections where the horn starts poking you in the forehead over and over. I do find myself, however, trying to peer into the math at play, looking, aurally speaking, into the way the lines cross and weave and how passages evolve interdependently, thrive briefly in their latest form, and then disappear.

Dorian Reeds (For Brass) is one of those recordings that makes me feel that if I was perhaps a bit more worldly in my musical tastes, I would “get it” better. I do like minimalism a la Riley and Reich, and quite enjoyed Starling’s other dip into Riley’s oeuvre, the Salt Lake Electric Ensemble’s superb take on In C. But this is super-aggressively minimalist, and its appeal is probably more scholarly than pedestrian. It must be noted that this is the first time the work has been created using something other than Riley’s recommended sax, and it works well (I would think, in my layman’s opinion) as a study in the composer’s style and its possibilities. Starling’s work on this is exemplary. He put years into its creation, and it shows. It is complex, rich, challenging, and excellently realized. Coming at it as a casual listener, however, I find it somewhat above my head and outside my tastes. Listeners more attuned to modern compositional works should most definitely come in and experience this.