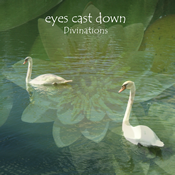 eyes cast down speaks in a quietly assured voice on Divinations, a suite of five pieces designed to be used for “inner work, healing and relaxation.” It’s something of a self-compilation, the first four tracks having previously appeared on multi-artist albums on the Free Floating netlabel and the last a recording of a live set composer Greg Moorcroft performed in 2012 and augmented in post-proudction in 2014. They come together here in a very pleasant, seamless and utterly relaxing flow. There’s no need to turn down the volume; Moorcroft’s pieces are naturally quiet, patiently carved in long, hushed pads and drones. His gossamer layers sit lightly atop one another, and even his most complex mixes of sound or percolations of texture land as more than a calm ripple. Which is wonderful. “Exquisite Divination of Patterns” sets the overall tone straight away with slowly circling ambient whispers, lightly Dopplered and paired against gentle keyboard notes. Moorcroft notes that this track marks his first use of soft synths. You’d never know, and you wouldn’t care; it’s enough to get carried off by the current of sound. And once you’re in it, you’ll stay there for the full voyage. Through the soft surroundings of “Crystalline” and on into “Radiant Perception.” This is where Moorcroft gets his “loudest” and the sound reaches its most active point. The sound here pulses, sounding a bit like a bowed instrument in spots. It’s got an interesting, almost hollow metallic edge and truly asserts itself over the meandering washes beneath it. Moorcroft goes heavy on the layers here, and the effect is nicely hypnotic. Acoustic guitar takes the forefront on “Snowdance in Starlight.” Moorcroft uses the instrument’s resonance beautifully, hitting hard, Hedges-reminiscent bass notes and letting them ring. Again, the layers here build, bringing the sustain and echo of the guitar into a constantly shifting background wash. “Ensō” is the live piece, nearly half an hour of complete immersion. Moorcroft laces in some bird sounds and prayer chant to further deepen the flow. On the chants, his voice is just a touch raspy–in a good way–and intimately close to the mic. It has the feel of ceremony, and the comparative coarseness of the voice contrasts the softness of everything else. A great way to spend half an hour.

I have been listening to Divinations quietly throughout several full work days, and left it looping in the Hypnagogue office. While I do recommend breaking out the headphones to get all the detail work, this album truly excels as an atmosphere enhancer. Whether you use it during your mediation or yoga or just letting it tint the air as you go about your daily routine, this is a release you’ll come back to. Absolutely worth listening to. Excellent work from eyes cast down.

Available from the eyes cast down web site.