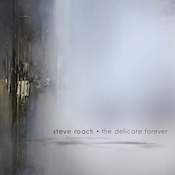 It is tempting to have this review simply read: Set to repeat. Press play. Because, really, there you go. With its roots in the original Structures from Silence and its pulse taken from the remastering sessions for that album’s 30th anniversary, The Delicate Forever is one of those Steve Roach works that’s designed to augment the space around you or open the space within you, depending on how you choose to listen. Each of the five pieces is marked by its own texture. In the title track, sounds like frozen droplets of ice ping, rattle and reverberate off the soft drones. The drones themselves, throughout the album, have a lightly rasping feel, moving in a familiar inhale/exhale wave. “The Well Spring” is characterized by an appropriately burbling sequencer line. It feels energetic (and charming) coming out of the pleasantly long ride of the opener. “Perfect Sky” drifts along on a sound like some ethereal pipe organ, its complex lines wrestling gently in mid-air. The tones here are sharper than anywhere else on the album, imparting something like an edge of mystery to the journey. “Where Mysteries Sleep” and the closing track, “HearAfter,” get an extra dose of reverb for more depth and dimension and a spacier, dreamier sound. “HearAfter,” in particular, heads straight into the kind of deeper zones Roach has explored on long-form compositions such as “Piece of Infinity” from Mystic Chords & Sacred Spaces. A nice touch here is to bring those “icy” sounds from the start of the album back into play. This does two things: lets your heavily sound-sedated brain know we’re drawing to a close, and lays out a seamless transition point as you loop into the next lap of listening.

So here is another episode of Music to Live In from an ambient master. If you fall into The Delicate Forever, and I believe you will, it’s also worth checking out The Delicate Beyond, a full-length (i.e., 74 minute) version of the title track. This whole stretch of music from Roach, inspired by the remastering of Structures…, has been superb. It has its feet in the past but exists quite fully in who the artist is now. This is the kind of music that first pulled into Roach’s orbit, and it makes me glad I’ve stayed here. Set to repeat. Press play. Simple as that.