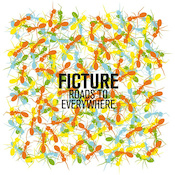 Ficture (aka Gábor Tokár) makes a solid debut with Roads to Everywhere, a release that shows touches of dubstep influence blended with cool post-rock and a shot or two of well-chilled lounge. You do have to love your percussion to dig into this stuff, as Tokár–who is, in fact, a drummer–jams it right up front on most tracks and gives it a lot of presence. To its credit, the percussive side of things is a nice mix of rapid glitch and straightforward bass-and-snare–“Turned At Once” rides on a very jazz-oriented drum base, complete with tasty little taps on the cymbals. I like the way this track thins down to wavering pads and an almost-buried bass riff while the drums leave their mark. There are a lot of groovy little touches happening here. Wah-wah guitar welcomes us into “The Knee,” a track I have to say I find a bit sexy. (Plus, it reminds me of a personal favorite artist, the duo called Canartic.) Manipulated vocal drops slur in the background, then a little drop comes into to sweeten the flow and open the piece up into a more certain post-rock sensibility. It does sound like Ficture grabs the same way riff to underscore “I Let It,” a track I feel is one of the weak spots here. It sounds like a forced remix of an existing piece, with singer Viktória Salgó’s voice wedged in a bit too awkwardly. Just to support that, I think that the instrumental version that closes the disc is a smoother ride, although the sound muddies up a bit early on. On the whole, though, there’s plenty to like on this release. “Wiseard” gives a nod to IDM with its lifted spoken sample, placed neatly into another jazz-tinged flow. Great bass here. “Ants” grabs hold of a thick dubstep bass line as it steps slowly along. It’s a little grim, compared to the rest of the disc, but it pulls me in. The swaying rhythms of “Camels Came” and its stuttering drums give me hints of classic dub. Lots of delicious little stops in here to texture up the flow.

Roads to Everywhere is a feel-good disc. I’ve found it to be a great traveling companion, driving along with the windows down and the sound turned up. Tokár knows his way around a tasty hook, and he knows how to work his sounds into a listener to get them moving. Ficture is a name I’ll be looking out for. Give him a listen.