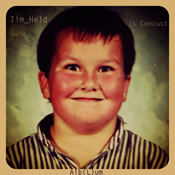 What we have here, friends, is a quick batch of glitchy oddness that has taken me a while to get into–but, like many of the odd-at-first offerings I get, Tim Held’s glitch-based Alb(L)um has found a tentative place in my ears. “Part improvisation and part random chance Alb(L)um’s key components were created by running percussive and melodic sequences through a synthesizer hooked up to various boutique guitar pedals,” says the artist’s site. Held created a batch of five- to ten-minute tracks using this process, then “scoured each track and sliced out sections he liked and then built songs around the selected sequences.” So we’ve got a bunch of disparate elements being stitched and soldered together to create beats and riffs that play with a familiar structure while being unmistakably unfamiliar and somewhat random. Controlled chaos, if you will, and Held controls it in some interesting directions. Spoken-word drops lend some old IDM cred to the thirteen quick pieces here, and mighty doses of wubwubwub bass make some tracks-“Duncan’s Duality” in particular–feel like dubstep’s weird cousin. “Blip” gets downright industrial. Fat, speaker-rattling bass tones and a processed muffled shout come away like Trent Reznor got his hands on some really good acid. (On another listen, I felt like I was picking up a leftover Suicide vibe.) “This Is It Baby” is a subverted club song. It keeps its thudding, unchanging beat and growling bassline, pounding themselves into a hypnotic haze as a voice repeats “Crazy universe” over and over. This is a full-volume-or-nothing affair, a fun track that just wants to be your best friend. Your maybe-scary, something’s-not-quite-right best friend.

Alb(L)um is going to scare off a lot of people very early into its 33-minute run. It’s freaky and fast and won’t sit still. The sound samples can be raw and harsh and they’re not exactly gently melded together. But take a chance–turn up the volume, open the mind, and let Tim Held’s art try to beat you into submission.