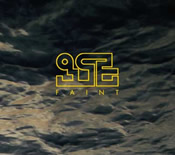 Normally when I get things from the Cyclic Law label I brace myself for another experience that’s dense, dark and ominous. Faint, the new release from Beyond Sensory Experience, is not like that–at first, anyway. It certainly gets there in spots, but for the most part it’s more of a sort of hazy, dream-washed meandering in a sadly reflective state of mind. A “life glimpsed through gauzy veil” quality hangs over everything, established right off the bat as a woman’s voice, half-awake or perhaps just half-aware, slurs through a three-count in waltz time for a lone piano to take up, equally drowsy in its unchanging repetition. The use of voice samples figures into the mix in several places on Faint, dialed back to the texture of a partial memory and thickened with echo. There’s a slightly voyeuristic feel to it when you find yourself listening closer to make out the words although maybe you’re not supposed to. On “Respect,” “Yearning,” “Blank” and, especially, “Stale,” this aspect is particularly strong. The urgent, almost desperate tone of the voice in “Stale,” in fact, gets downright unsettling. The fact that it’s paired off with a slow funeral march on echoing piano just augments it. There are also a lot of pause points on Faint, gaps between notes filled with resonant sound and expectation. Artists Drakhon and K. Meizter respect the potency of the pause enough to make the most of its emotional weight, and are extremely precise with details. There are no wasted sounds. And when the duo decide to drop the dark-ambient hammer on the proceedings, they drop it hard. It comes like an industrial press in the middle of “Stumble,” an effectively jarring moment as thunderous blows punch into a bed of droning pads. Nice juxtaposition.

Listening to Faint is like being part of a shared bad dream, one that you wake up from still feeling the uncertainty and concern. It works its darkness into the listener patiently but distinctly, and the richness of the sound makes you want to head back in and listen again. This is not off-putting dark ambient, but it still offers a fair challenge to the faint of ear. Definitely worth a listen.