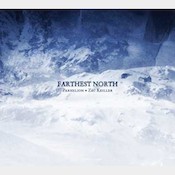 It is cold and dark, this place we’re being taken in Farthest North, the new collaboration from Parhelion and Zak Keiller. As the duo “[focus] on the stark, cold immensity and volatility of a place located at the ends of the world,” we are rimed with the standard memes of isolationist ambient. Cutting electronic winds, deep bass grumbles, and a well-crafted, adequately morose sense of being quite alone take the forefront. This is us dying a relatively slow but placid death in this wasted tundra, looking out over the coarsely angled, inescapable landscape around us while at the same time finding ourselves taken in by its stark and dangerous beauty. We ares guided through the threatening depths and ominous rumble of “Perfect Desolation,” which surprises us near its end with a sudden, if brief, brightening of tone before it fades into a hiss of wind. We are exposed to the alien sounds of “Smokey God,” where bass pads rise and fall like the sleeping breath of some forgotten entity and cavernous echoes surround us. It’s not all doom, gloom, and an icy fate. The brief “Abode of Light” comes in more like a standard ambient track, its tone brighter and softer. It flows into “Opal Sky,” giving us a glimmer of hope with glistening guitar lines, the light sparkle of sunlight on the snow. But listen to the way a bass drone insists itself upon the scene before the tone turns darker once again. The piece is a nice break in the flow, and effective both for its lightening aspect and its subsequent return to the shadows. The title track is the longest tour on the release at just over 10 minutes, and it passes slowly through both light and shadow, impending peril and now-you-can-exhale relief. Farthest North runs a scant 45 minutes, but its enveloping nature draws out that time. Beatless but loaded with imagery, it’s a release that’s easy to fall into. Fans of darker, borderline isolationist ambient will fare better with Farthest North, but it’s well worth listening to if you like your ambient with real visceral appeal.