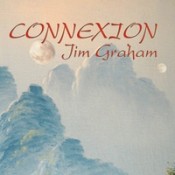 When an artist’s own release page notes that the various songs on his album cover post-industrial, ethereal, sci-fi, and “whimsical circus” and the instruments include “egg slicer, kitchen whisk, [and] computer heat sink,” it’s a fair bet you’re in for a mixed bag. Such is the case with Jim Graham’s latest release, Connexion. There’s quite a bit of good stuff in these 11 tracks, the best of it falling somewhere between New Age and ambient. On the New Age side, take a listen to “Fire and Water.” While a repeating four-note arpeggio offers a firm base, Graham slowly builds sounds around it: an evolving melody on piano, lonely notes on bass speaking short phrases, and moments accented by the rasp of a bowed bass guitar. It packs a very pleasant honesty in its deceptively humble construction. Its followup, “Yes,” shines with an easy equation of flute over quiet chords. It’s charming and soothing. “Steel Dawn” straddles genres, opening like an ambient piece, with droning pads drawing near-straight lines against the thump of a drum. A sequenced rhythm establishes itself as the tone begins to brighten. In the last minute or so, the piece blossoms into a full-on song. I like the thematic transition here; the narrative is clear. “Chant”
is a nice take on tribal, with pulsing drums and breathy pads. Clattering chimes round out the atmosphere. “Northwind,” which Graham describes as “polar wind trance,” is the longest track, a nicely immersive bit of minimalist drone that’s easy to get lost in. Graham balances the cold feel of the wind-rush pads with bright tones and carves out a comfortable space.

Connexion is a pretty solid bit of work. Weaving its way through styles as it does could have resulted in a feeling of uncertain identity, but Graham handles the switches well. Some tracks feel weak by comparison to others, but all in all it’s a release I’ve enjoyed going back over.