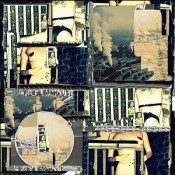 Where shall we file this one? Under trip-hop? Could do that. It’s got the beats and breaks and the nice jazzy undertones. Under plunderphonics? Yeah, sure, that’s an option. Vocal drop-ins, lifted samples, that stitched-together feel that somehow manages to work its way into rhythms that hit and stick. Maybe we just file it under “better than I thought it would be” or “grew on me quickly.” Definitely that. The bi-coastal duo of New York’s Eddie Palmer and San Diego’s Brett Zehner lay down something quite interesting on Hunting a Schizophrenic Wolf, a confluence of styles that caught me a bit off-guard at first. Coming in, the release would seem to be the sort of loop-laden offering we’ve heard before. Palmer and Zehner pull out and lace together bursts of swing-band brass and some fairly standard breakbeats. But then they’ll freeze a moment within a loop, isolate a tone and leave its resonance hanging out there in a hypnotic wash. Catch it pulsing along toward the end of “Disembodied Poetics” or the way layered moments float in static, nudged by a vocal drop-in, at the end of “Bank of America.” There you were, tapping along to a cool lifted rhythm and mutated jazz licks, and then you realize you’ve gotten lost in a smooth drone. When the duo bring the beats back in or restart the samples, it’s a gentle re-folding of the space and the ride continues sensibly along. It’s never jarring. That, perhaps, is what surprised me most about Hunting A Schizophrenic Wolf; for all of its disparate elements and its jigsaw construction, it’s a pretty seamless ride. It makes sense in a way I didn’t expect it to, and it didn’t wear out its welcome on repeat plays. If anything, I kept paying more attention to what Palmer and Zehner were tossing at me. Is it a bit familiar? Well, yes. You’ve heard this stuff before. But within that familiarity there is plenty of innovation and interest that freshen things up and make this release one worth checking into.