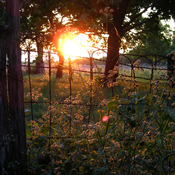 Austin-based duo FiRES WERE SHOT run acoustic guitars through effects and looping stations to create a pleasingly hypnotic blend of warm organic sounds and deeply resonant drones on Pieces of the White Sun. John Wilkins and Clay Walton open this 11-track affair with the hum and buzz of gear turning on, and then start strumming, picking and layering. Listening to this release is a little like playing an early Windham Hill album having just enjoyed a bit of your controlled substance of choice. That familiar warm, folksy feel runs through everything, melodic, laid-back and intimate. Take that and lace it with the mind-salving effect of the repeating, near-minimalist loops and the long-held drone structures that run underneath it all, and you’ve got something that can make you simply lose track of time. Close listening is a must, as Wilkins and Walton pay  a lot of attention to the use of harmonics and resonance as ways to quietly fill a moment, and also to capture as drone elements. There’s a lot to dig into here. I like the almost clockwork cadence of “Scattered in the River,” and the way the duo chop up the sound as the piece glides to a close. There’s some smooth slide guitar howling gracefully against a fast-picked counter-melody on “In the Heavens Meadow,” and it comes off as sweetly soulful. “McElligot’s Pool” dives deep into the repetition and ups the ante with a gritty, raw edge and edge-of-feedback wails. Again, what really works here is that the honest, folk-music tone, rich in its simplicity, anchors the thing and lets the two explore the building sound. As much good as I have to say about this release, I have to add that FiRES WERE SHOT almost lost me with the abrupt ending of the first track, “Before That Time.” While I’ve come to understand it a little better as an artistic choice after repeat listens, it still doesn’t work for me. And it’s not just that it sounds like someone hit a button too soon and made a rough edit, it’s that–perhaps in my opinion only–the piece deserved to come to a better close. Sometimes you can cut a piece off in mid-statement like this and it’s fine. They do it well on “Long Match,” which is a pretty straightforward song that gets some great texture from what sounds to these ears like augmented/distorted vocals. When this piece hits its drop-out, it throws the listener into a hushed space where the drones continue to wash back and forth, carrying the echo of the melody until it all fades down. It works.  In the case of “Before That Time,” though, the sudden stop just amplifies the fact that there was more to be said, and it would have been worth hearing.

Pieces of the White Sun is a great thing to dive into, headphones-first. Wilkins and Walton exhibit complete control over their loops and layers, and play up the acoustic side. It’s got charm, and it’s got that nice experimental edge. Worth discovering.