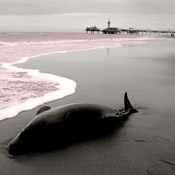 Constellation is a very familiar-sounding album that’s rooted in an old-school style but which lacks an edge of originality that would serve to lift it beyond simple imitation. The songs here are decent, if a bit by the numbers, but there’s nothing out of the ordinary. Red Shifting the Oceans doesn’t miss any of the requisite waypoints on the journey. The New Agey piano ballad is here on “Tethys Unveiled,” with its metronomic programmed drums; the high-energy, techno-like song is here in “Glimpse of Life,” which is an admittedly fun piece before its lack of change wears out its welcome; a touch of world flavor even slips in with an Eastern-style string break in “Rosetta.” Here I must give RSTO some credit, as this prog-lite ballad is fairly catchy. But, as with many of the tracks here, it is plagued by an unpolished feel, the sense that the artist has to work well within the strictures of the genre. It’s like, this is the box and we must stay in the box. It renders the music a bit flat which, when you’re already coming across like you’re just copping styles, seems like more of a problem. It doesn’t help on the originality end that “Tethys Unveiled” and “Skies of Tethys” share the same core melody. It could very well be that the pieces are meant to be thematically linked by this (as the titles would suggest), but it mostly serves to amplify the release’s overall sense of “I’ve heard this all before.” One track does kind of stand out here: “Sibylla” manages to briefly crack the mold with hand percussion holding a steady beat while RSTO assails it with harsh-edged electronics. It’s not a great track, to be honest, but it’s a track that shows some original thought, so points for that. Unfortunately, it also cuts off oddly before dumping into the next track, which happens more than once on Constellation, so…points off there.

There’s potential in Red Shifting the Oceans’ work, but as long as it’s held in check by those self-imposed boxes, we won’t hear it. The work here is good enough that you may want to give it a listen, even if you may come away feeling that you already know these songs.

Available from the Red Shifting the Oceans web site.