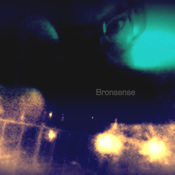 On his quick-hit debut, Bronsense (aka Bron Halpin) churns out five minimalist experimental electronic pieces. The sense is of a guy and his gear creating in the moment, of the twisting of knobs and tapping of laptops, of giving genesis to odd sounds and tying them together. In spots, it’s cacophonous. In others, it comes across as comparatively more thought out–even if it’s still a bit jangly and odd.  The first track, “Introducing,” isn’t truly representative of what follows. It’s 50 seconds of garble, basically. But then Halpin kicks into the first of two long tracks (“long,” at seven minutes, being a relative term) and shows what this is really about. Resonant bass tones, long droning pads and endlessly looping samples blend with a wide selection of electronic squawk, and the mess takes on its own distinct groove. Further along, “Taps” wraps the listener in swirling drones in Bronsense’s closest approximation of an ambient piece. “Xmas Pud,” the other long piece, is a warped landscape carved out of distorted vocal samples and more random electro-clatter. Again we get something that’s a bit crazed, bordering on random, but which works itself into a hypnotic form with the essence of a catchy hook. Odd but effective. On the other side, there are those more noise-oriented things that don’t resolve themselves quite as satisfactorily, like “Plucks,” which wanders aimlessly by over the course of two minutes. It’s a bit like watching a drunk guy stumble down your street. Or the even shorter “Freak Out,” which simply lives up to its name and, really, seems to only exist to fill up two minutes. Luckily, these are the exception rather than the rule. Bronsense is never entirely accessible, and it’s firmly tethered to its experimental mindset, but given a chance, its weirdness and noisiness can work themselves into a pretty interesting listen. Not for everyone, but it will probably surprise a lot of people.