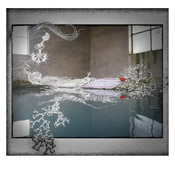 Had I thought to check before listening, I may not have reviewed this re-release of a 2005 work from Bruno Fleutelot. My policy is to disregard work over a year old. But since I only learned of said status after diving into [ozo viv], and having heard what it offers, I felt it was worth giving up a few words. Thematically based on lunar landscapes, according to the artist’s label, [ozo viv] offers up guitar-based minimalism heavy on drones, processing and atmosphere. Touches of vocal samples work their way in as well. The overall feel is slow-paced music that’s taking time to think. Fleutelot understands the importance of pauses, not just the ones filled with resonance and fade, but simple breaths of silence within a flow. His guitar playing tends to focus on patient, simple playing, letting the sounds of the strings melt into his electronic backdrops. “Palus Nebularum” is a great example, as he strums his way through a chord one simple and deliberate string at a time while the background whispers with understated electronics and spectral voices whimpering in the distance. “Oceanus Procellarum” pairs the slow guitar with echoing string rasps. Fleutelot hangs a lot of pauses here, gaps in the sound that hold you in a bit of suspense. The feel is dark and heavily weighted.  “Mare Australe” takes a similar approach with piano. Fleutelot plays slowly while a drumbeat shuffles in, the combo working through its slow-motion song over a quiet, swirling curtain of electronic sound. Aside from these sort of near-deconstructionist pieces, he also meanders into experimental territory. “Sinus  Roris” is one of the dark bits,  driving forward on a metallic, scraping sound that stalks across low-end drones. It’s uncomfortable in it edginess but also a little hypnotic. I particularly like the bonus track, “Marc (Pt 1, 2 & 3).” Fleutelot modulates the flow here, going from deep, hypnotic drones to clear guitar tones that waver and fade like heat shimmer.

Fleutelot maximizes the effect of his minimalism, heightening our awareness of waiting for the music to do its next thing. The music here pairs simplicity with uncertainty, the obvious with the odd, and the blend works. [ozo viv] is mesmerizing and a pleasure to give a deep listen. I do hope this reissue heralds newer music from Bruno Fleutelot.