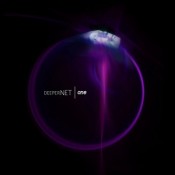 Bust out the strobes and glow sticks and get ready to give your subwoofers the hearty workout they need. DeeperNET’s debut release, One, is a huge, throbbing, speaker-punching mass that lands somewhere in the middle of EDM and trance. My initial response was to write it off as thinly disguised club music, all thump and thud and no substance, but then I realized how in the middle of the sound I was and how firmly it had me in its grasp. Yes, it threatens to overdose on bass drum and its own clubby memes, but producer Andrew Miles manages to keep it fresh, largely calling on a depth of sound and the right balance of big and small. He pays as much attention to the clicks, gurgles, and chirps that pepper the background as he does to the in-your-face beats and VIP-room-worthy synth runs. If you’ve listened to any EDM, you know this stuff. You’ll feel the beat drops coming from a mile away in a track like “Sirens,” but then when they do happen, you still reflexively go, “Cool…” Can’t help it. Miles’ constructs hit on a visceral level, especially when you’ve got them cranked up. Which you will. So accept that you’ll hit certain recognizable landmarks–“The Eagle Has Landed,” which is superbly potent and relentless in its 10-minute sonic psy-trance assault, throws me directly into an obscure old track called “Searching for UFOs” by Astral Projection–and just dig on the effective power at play on One. Another solid release from Spotted Peccary’s growing O3E imprint.