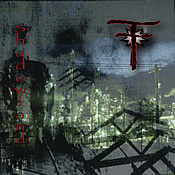 So this is what despair sounds like. Please expect no respite from the darkness here in Shadowland, for none is forthcoming. Christopher Alvarado, recording as Twilight Transmissions, begins the assault from the first note–and he’s not interested in taking prisoners. Oh, sure, he’ll temper this industrial beating with some irresistible iron-press beats on tracks like the powerful, addictive “Ebony Encrusted Ruins” and “Lost Monuments,” and let you burn off some of that dark energy, but you’re never allowed to forget that these beats are surrounded by a dark, oppressive sound-pit that’s feeding and feeding off your very visceral response to what’s happening here. Remember when that guy said “Anger is an energy”? Yeah, that would be this. This is soul-crushingly dark and massively industrial–decidedly not for the musically faint of heart. But Alvarado’s not one of those dark artists who leans on the keys for an hour. There’s a lot of shifting tone and tempo here, and a lot of attention paid to balance–the balance of the weightiness of sound and the anchor-point of rhythm that makes the disc retain a scrap of accessibility. This is what I like about Shadowland; I know I’m being set adrift in a churning mass of heavy sound. I know it’s not meant to be all that pleasant, and that it’s meant to drag a little anger and primal response out of me. But at the same time I’m being pelted with these infectious, tribal/techno beats and I’m responding equally to that. Check “Pillars and Fog” for a prime example of this. The sound is a morass of bass and electronic squibble, but under it is this magnificent heavy-handed pulse slamming out the time. Just bring out your inner animal, already. “Skin Walker” leads with the drums, but this time it’s less about dancing and more about ritual. The sound is underscored with rough,  inhuman snarls that let you know not only are you not alone, you’re also not safe here. If you do happen to be one of those listeners who love the simple, heavy crushes of sound dark ambient’s known for, the title track, among others, quite fits the bill, laying into you sonically with a relentless electronic wind backed with shifting, unidentifiable sounds coming from all around you.

I quite like Alvarado’s work, both under his own name and as Twilight Transmissions. His attention to detail and layering is superb. He knows there’s more to dark ambient than weight; there’s the sense of narrative, the thickness of the atmosphere, and the culling of dark emotion from the listener. On Shadowland, he nails all this down in grimly eloquent fashion. It’s heavy, it’s heady, and it accomplishes what it says out to do–control you.