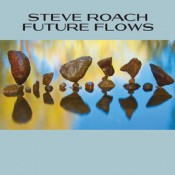 Future Flows is the second piece of a triptych of discs that began with the excellent Soul Tones, and will conclude in a few months with the final, name-as-yet-unknown disc. As he moves into this next stage of the series, Steve Roach shifts from soft, cocoon-like soundscapes into big flows with more texture and a forceful presence, along with moments of encroaching shadow. In his press materials, Roach likens the music here to other “symphonic ambient” works like Mystic Chords and Sacred Spaces. The comparison is quite valid; there are distinct echoes of that four-disc masterpiece happening here, and they share a sense of remarkable depth and dimension. Counter to its predecessor, Future Flows rises initially on a big, almost ominous crush of pads and tones in “An Omnipresent Sense Prevails.” It’s a dramatic and powerful way to begin this journey, and a visceral one, too; the track holds its immensity until its waning moments when Roach agrees to release us and begin moving us into other territories. “Spectrum of Change” eases out of the opener’s power to become a warm, dreamy river of sound with a rich and resonant low end that touches the soul. It’s got a strong emotional core. “The Texture of Remembering” is a loose swirl of sound, a 10-minute cocoon with a distinct and familiar feel to it. There’s a slightly bouncy analog energy in the flow, but towards the end Roach again takes a hand off the controls and lets it wind itself down to a cleansing close. “Heart of Light” is a short, bright blend of crossing pads, like a sliver of Quiet Music offered into the mix. On the longest track here, “The Future Flows From Here,” my mind is pulled toward Landmass for a point of reference–that mix of broad, yawning pads underscored by rolling analog constructs that lends it some energy and urgency. The rhythmic elements glimmer against the quiet backdrop as the play off each other. When they fade out, you’re left with the quiet parts and the focus moves to their sonic textures and the shift into the final track, another rich and vast cosmic space grounded with a rumbling low end.

Roach is releasing the three parts of this series several months apart. They’re not necessarily meant to be taken as directly connected works; rather, he sees the space between releases as time to immerse in the discs. One can flow right from Soul Tones into Future Flows, however, and it’s interesting to hear the change of timbre as this new piece heads into a zone that is distinctly its own. The time I’ve spent letting Future Flows wash over me has been well spent. A definite headphone listen that’s also nicely effective at low volume. Let it loop, and look forward for the next one.