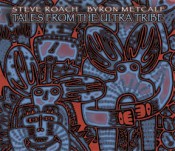 The electro-shamanic ritual continues on Tales from the Ultra Tribe, the new offering from Steve Roach and Byron Metcalf. Coiling up out of the same spirit well that has empowered earlier journeys–most notably the epic tribal-ambient work The Serpent’s Lair–this new release focuses less on ushering the listener into the lower worlds and more on sharing its power in an energizing, spirit-releasing way. This is a statement on the connection between primitive and modern, tradition and transformation. It is about trance states imposed equally by drum and drone and the way in which that thing, that ancient thing inside each of us, can be called and awakened by either. The format is familiar; Metcalf’s thunderously potent drum work, his rattles and shakers and pots, set up our collective pulse and Roach conjures a mist of sound that tells us how and when to breathe on our journey. As the disc moves along, Metcalf the traditionalist and Roach the technologist switch places at the helm. At first, it’s largely Metcalf’s show because we need to be called into ourselves, and the drums are the way in. The 13-minute “Setting Forth” is packed with medicinal percussion; Roach’s sounds gather and curl like stormwinds. This eases out into “A Noble Direction,” pushed ahead by the deep resonance of Metcalf’s frame drum. There is a point here where, for just a few seconds, everything drops out except for one pure-pulse beat on the drum. It doesn’t last long, and I wish there was more of it, but it’s an incredibly effective thing where your head just empties out and there’s just you and this simple sound connecting you to the flow. And then you’re back in it, moving into Roach’s domain for “Midnight Migration.” Here’s the first switch from tribal to tech, a transmutation that doesn’t lose any of the preceding potency as analog synths take over the role as guide, curling into distinct trance formations and adding a bit of bouncing groove. Metcalf’s drums continue to call thunder into the mix. They swap back for “Magma Clan,” where the shadows roll in, distant didgeridoo sounds haunt the backdrop, and the drums grow thick and intense. Just when it’s looking a little grim, “Road From Here” amps up the energy, a high-BPM churn of drum and guttural snippets of analog that should set your heart racing. If that doesn’t do it, the massive drum slaps late in the track will. By the time “Fire Sky Portal” and “Return of the Dragon Bone Clan” roll around, your mind should be suitably melted and set free; “Clan” in particular continues into a trance zone fueled again by the drums. Roach’s synths hiss and spit in the background, burrowing fresh tunnels into your head. At last you’re left to sit in the comparative quiet of “In the Safety of Travel,” cool down and come back to start again.

Whereas Tales from the Ultra Tribe has been noted as taking its cue from Serpent’s Lair, or being the descendant thereof, I came into it expecting more of Roach and Metcalf’s excellent “let’s go to the lower world” excursions. But Ultra Tribe is a thing all its own while nodding openly to its lineage. It is an exhilarating tribal ride that doesn’t head into dark zones but rather infuses the listener with soulful energy and a sense of release. That being said, if drums aren’t your thing you may have a harder point of entry–because that’s what this disc is about: the ritualistic, mind-opening, trance-instilling power of drums. But as they take hold, they simply melt into the organic whole of the thing, amplified by classic synth work from Roach, and it’s not as though you’re going to be in your body for the entire ride anyway. Get the headphones on, lay down somewhere quiet, and take this journey. Another strong dose of sonic medicine from Roach and Metcalf.