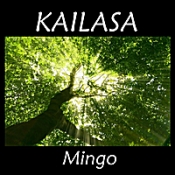 I’ve followed Mingo’s musical path ever since he hooked me with The Once and Future World, but if you’d had me sit down to listen to his new release, Kailasa, without telling me who it was, I would never have guessed. Whereas his past outings have dwelled in places that were a bit dark, spacey and amorphous, Kailasa is a bold departure that finds him very much in New Age/world-music territory–and it’s pretty clear he likes it there. Flute, guitar and hand percussion, along with samples of ethnic instruments offering sounds from kalimba to koto, add an organic touch to Mingo’s backdrop synth flows. There’s energy here–the catchy beat of the title track, pounded out with a hollow-log sound backed with frame drum, counters a melody on floating synth flute (I had to ask). And when echoing acoustic guitar flies into the mix, it adds not just sound but potency. The steady drone in the backdrop provides an anchor point. “Aarushi” reworks a similar equation with keys that pack a Ray Lynch tone, matched with tabla-like percussion and a blend of arcing pads and, again, a straight line of bass drone underscoring it all. This is not to say Mingo has left his spacier side behind.  “Aamanaska” is a graceful and breath-slowing mix of washes and light atmospheric touches. “Sapta” opens with a melody played with charming hesitancy on what sounds like a muted kalimba, and accompanies it with a melody made of full, bold chords and keys that mimic the almost-uncertainly played tone of the kalimba. The plodding pace–which works–is very much a Mingo hallmark. The closing track, “Saanti” reminds me in places of  “Hollow Ascension” from The Once…, which was the track that cemented my appreciation of Mingo’s music. This is a guitar piece with a beautifully lonely feel, accented by small sounds like the distant call of a bird. (To be honest, I can’t figure it out.) A simple pulse on drum and shakers rides under the sound, and long synth pads sing a bit sadly as the track winds down.

Kailasa is a quick hit, running just over 30 minutes despite packing in nine songs. Of course, it gets longer when you loop it, and chances are pretty good that  you will. Mingo challenged himself to switch up his style on this release, and it’s testament to his talent that he pulls it off. The mix of shadowy ambient and snappy New Age music meters out just enough of both, and reveals more depth on repeat listens.