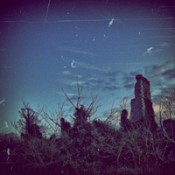 I have an interesting relationship with the music of Parallel Worlds (aka Bakis Sirros). When I first encountered his solo work, it didn’t really strike me. This, despite the fact that everything I read cited him as a master of analog synth. I felt like I was somehow missing something. However, I’ve been quite taken with his work as a collaborator–Circo Divino with Alio Die is on my recommended CD list, I gave Exit Strategy with Ian Boddy good marks, and now this, his release with Dave Bessell, marks another Parallel Worlds offering that makes me think I wasn’t listening closely enough back then.

Being a Parallel Worlds disc, Morphogenic steps off from a strong analog-synth base, embracing its retro tone and geometric structure, and then diverges along a number of paths. Bessell, who is part of the “analogue synthesizer quartet Node,” adds his contributions not just on keys and wires, but also lends processed guitar into the flow. (On his web site, Bessell notes his fondness for playing “loud guitar with lots of distortion.”) The tone overall is somewhat shadowy and suspect, filled with skittering electronic sounds running in and out of the beats and the clockwork cadence of the synths. The detail work here is superb; there’s not a moment that’s not filled with something. On top of that, the pieces also show excellent movement and development. The opener, “Oblivion,” lays the shadows down in thick strokes forming a tight sonic space, but later widens and lightens, its last three minutes a lush, retro bit of sci-fi flavored space-pop. “Disorder” builds in tension, piling on rising chords and drama-laden bass notes, spinning things into minor discord and then simply cutting out. “Inwards” slowly blossoms with a tick-tock rhythm and cool, soft pads that temper the initially tenuous flow. Also worth noting is “Corruption,” where you get a real taste of Bessell’s beloved distorted guitar, slashing the air over symphonic bombast from Sirros. This track also features some great glitch/noise textures. Track to track, it’s been the combination of narrative sense and rich, ear-nabbing details–along with the analog grooves that I love anyway–that has kept me coming back into Morphogenic. My appreciation for Sirros’ music grows greater with every new collaboration!