Bruno Sanfilippo is a multi-talented artist, capable of crossing genre borders with ease. On his two latest releases, Urbs and Piano Textures 3, he shows two very different compositional sides–and both are superb in their own right. 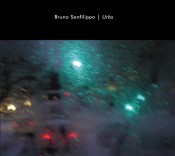 Urbs is a deep ambient disc, beatless and drifting, composed from synthesizer washes, liquid electronic textures and field recordings. This is a heavily atmospheric album, full of impression and amorphous imagery and an almost unfathomable sense of vastness. The field recordings are melted and manipulated into new forms. They dwell like ghosts of memory in the background, retaining recognizable elements–the rolling murmur of a crowd, the lilt of a voice across a public address system. There’s an intriguing austerity to Sanfilippo’s landscapes in Urbs, a wind-swept loneliness that comes to feel very personal. This is about you, separated and isolated in an urban canyon. The pauses between moments, especially in “The City Reflected,” become small eternities of waiting as notes fade into an impossibly distant horizon. Sanfilippo leans toward an uneasy feel throughout much of the disc–“The City Reflected” lightens noticeably toward the end–but his sounds are so foggy, floating and incorporeal that they become oddly lulling. It’s easy to give yourself over to it all. This is never more the case than on the stunning “Chaotic Order.” This 25-minute track evokes Eno in its long-drawn, unobtrusive pads.  A repeating chime brings up echoes of Thursday Afternoon. Negative space is used beautifully throughout; Sanfilippo is definitely not afraid to hang a pause. This is a piece you internalize in short order, the cadence of the warm synth bringing your breathing in sync. The field recordings here exist at the edges of hearing, a slight breeze of voices wafting through. Headphone listening is a must with Urbs. Sanfilippo’s details are exquisite, down to the very smallest, and you’ll want to take it all in. Light taps of percussion pepper the background, quiet drones rise and fall, and he never seems to run out of new sounds to fold into the flow. This is a simply amazing piece of ambient work.

Urbs is distributed by Hypnos Records. 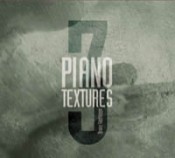 On the other side of the talent coin is the simple, romantic New Age-style piano compositions of Piano Textures 3. I say, in all admiration, that this disc makes me want to pour a glass of very good wine and sit in contemplation while it plays. Sanfilippo offers up quiet and quite emotional ballads and the occasional neo-classical foray, all carrying the feeling of a gentleman simply sitting down at his piano and playing what he feels. His playing is crisp and clear, and he again shows that he understands the potency of a pause, letting notes ring down to quietness with no need to overfill the space. In places the pauses feel as though Sanfilippo is thinking about the next thing he wants to say, and the notes come only as he reaches that point. This is a very personal disc, and you won’t be able to help but respond to the range of feelings Sanfilippo takes you through. Although it clocks in at under an hour, the effect stays with you long after. This is a gorgeous, must-hear release, particularly for those who appreciate the clean sound of solo piano. Pick a wine, put the disc on, and listen.