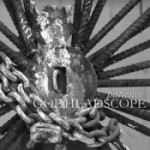 It’s standing policy at Hypnagogue that I do not review discs that are largely lyric-based. But on Patience, the new release from M. Rosin’s Godheadscope identity, the lyrics are pulled and twisted and half-buried in the mix, rendered down to chant-like aspects of a musical ritual. This 22-minute set of four pieces rides on heavy layers of guitar and synth drone as Rosin culls together elements of rock and folk and submerges them in his sound-field. The result is a sort of darkwave feel, moody and ruminative and weighted down with concern. Rosin’s voice takes on a priestly tone in “Solidarity,” the repeated phrase “our ruin now a temple” lifting like a homily over howling guitar chords from Claudio Alcara. “Medusa in the Cistern” is comparatively invigorating, hurrying in on a thick bass run. Here, more than on the other tracks, Rosin plays with his lyrics as a musical element, distorting the quick-paced, half-blurted recitation to the point of being indecipherable amid the raspy drones over it, but also heightening its sense of raw, fear-churned urgency. Patience makes the absolute most of its short run and is another release where it feels like your sense time was given the day off. Your twenty-two minutes inside Patience seems so much longer; it’s a wormhole of sound and sensation. A compelling piece of work from Godheadscope.