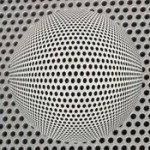 Do yourself a favor, and before you listen to NMTRv1 from the collective called The Nothing Machine, go to their web site and dive into the backstory. Kudos to these folks for crafting their own very cool and detailed mythology around the release. As far as the music goes, this is an hour-long deep dive into minimalist noisescapes, where rough-edged drones scrape across a wasteland scoured to the bone by sound. There’s a lot of vastness and emptiness at play, and a suggestion of something sinister pulling at the edges of reality. After all, these are the sounds required to stem the effects of the telomeric shortening that affected the technicians when the actual Nothing Machine managed to tear a hole in reality. You don’t get “nice” out an industrial accident like that, after all. This stretch of the disc is very good isolationist ambient, the textures held back enough to pack them with unpleasant emotional impact, a distinctly creepy feeling that pervades you even as the hypnotic dronework burrows a sinkhole in your ability to form conscious thought. At the halfway point a repeating beat drops in out of nowhere to mark a change of direction. A great touch that saves the disc from being a one-note work. Electronic skitterings run around the edges of the sound. (Which, to my ears, borders–in an interesting way–on being tribal.) NMTRv1 changes faces a few times before it’s through, going from sparse electronic pulses to near-silence to grinding stacks of conflicting noise. Every new redirect is handled with expert-technician cool, and each recalibration of the Machine gives you a new dimension to try to push through. Fans of dark ambient will want to fire up this machine immediately; others should approach with caution. NMTRv1 is capable of distorting reality. The effects can be surprisingly mentally liberating.

Available from the Nothing Machine web site.

And my sincere apologies to The Nothing Machine for sitting on this disc for close to a year.

One thought on “The Nothing Machine, NMTRv1”