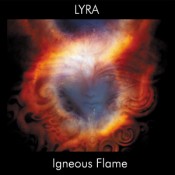 For his latest release, Igneous Flame (aka Pete Kelly) opted to put aside the tools he’d gotten used to using to create his typically airy, richly layered ambient music and look for new ways to achieve his sound. Lyra started life as a guitar ambient disc in the style of David Sylvain but, as good Art often does, soon steered itself off in different and more individualized directions. The result was that Kelley split the work into two discs–one being synth-based and the other more rooted in guitar. The two share the warmth and depth typical of most Igneous Flame discs. Low drones form a base over which Kelly floats vaporous pads, long and prone to slow fades, sometimes giving themselves over to a big buildup that swells before evaporating. In among the drifts Kelly, as always, weaves emotional and narrative threads. Take a track like “Translucence,” which eases along, shifting tone before passing through a rushing wash of sound, a sort of sonic nexus, a portal that gives way to a new expression. There’s excellent motion at work here, and it packs its share of drama. “Brilliantine” shows off the same sort of shifts across its 10-minute span but keeps itself quiet through the changes. “Crystalline” adds some extra dimension with the solidity of quiet piano that appears in the last minute or so, rising like crystal in the midst of another gauzy flow. The only mis-step for me on disc 1 comes in the middle of “Auric,” where Kelly wallops a stretch of calm with a gong. A big gong. I’m just warning you in case you’ve got a heart condition. It must be said, though, that “Auric” does build to that moment, with almost orchestral swells pushing through in points, and Kelly moves from there to a spiraling whirl before easing back, so some leeway has to be given from a thematic perspective. But oh, that gong… It’s the only disruptive moment in an otherwise delightfully meditative flow.

By comparison, disc 2 comes away almost as if Kelly wanted to give us more of what worked in disc 1, but then ground the whole thing with the earthy waypoints provided by his laid-back guitar style. It’s an evolution of the first disc that shows how one more element can change ambient. I like that Kelly doesn’t make this just an ambient disc with guitar overlay, however. The guitar picks its spots and only comes in where it’s needed, where it neatly augments the moment. Its first real appearance happens more than halfway through the first track, a light and high bit of phrasing with a touch of a folksy twang that drops into Kelly’s signature flow. The title track features flickerings of acoustic guitar, butterfly storms of notes scattered across its face. It’s truly a blend of ethereal and corporeal, the dreamy and the distinct, and Kelly meshes the two sides of the equation perfectly, again and again. Listen to “Spark,” where at points Kelly pulls everything back to a point of near-silence, absolute wisps of sound from both sides–his lightest drones, the gentlest touch on the strings–and makes stunning use of the resultant negative space. You find yourself holding your breath and waiting for the next moment to be created.

Lyra is not an easy disc to write about; like many excellent works, a simple listen will do more for your understanding than anything I can try to say here. What needs to be said is that Igneous Flame is continuing to advance and improve, challenging himself with every new disc while managing to maintain a signature feel to his music.

Kudos also go to Kati Astraeir for yet another stunning cover.

If you’re interested in Kelly’s process and/or gear used in making Lyra, he jotted it all down in blog form for you.