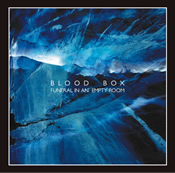 Although Funeral in An Empty Room adheres largely to what one would expect in a dark ambient work, and although at times in my own listening experiences I bordered heavily on a “yes, yes, let’s get on with it” mindset, I also found that I couldn’t stop listening. Perhaps it’s the effect of having Michael JV Hensley at the helm; this former member of well-known dark ambient group Yen Pox clearly knows his way around the dynamics of getting grim. Funeral is a well-modulated bit of darkness. Hensley knows when and how to thin out the density of his barbed and scraping sonic walls in order to make the next round of buildup that much more effective. That way, the disc shifts from lengthy stretches of soul-crushing weight to brief and, at times, almost beautiful reprieves. When Hensley eases off to give you breathing room, his dirge-like pads exhibit real grace and feel melodic and reverent. (Hey, it’s a funeral after all.)

So yes, what you’re getting in Funeral in An Empty Room doesn’t waver a whole lot from the standard template of dark ambient. But there’s something in its excellent construction and the way your mind and soul get manipulated across this hour-plus mass that brings an undeniable understanding that this is dark ambient done very well.