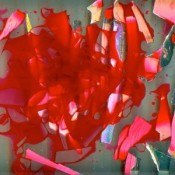 Sometimes it seems to me that artists on the Auraltone label are intent on trying to weed out the musical weaklings among us with the way they start their discs. Cuts, from Dentist, is no exception. Lou DiBenedetto created much of the work here while wrestling through depression; it’s reflected in the raw dissonance, the anger that surges through big, overamped chords and the barbed walls of sound DiBenedetto keeps throwing up between himself and the listener. You’re being dared to look inside what he’s fighting, every day. And as unapproachable as that may sound, there is a sense of motion, of striving very slowly forward, that keeps the listener–the bold listener–in place. It’s not easy. If you can claw your way through the sonic briarpatch of “Skies,” you just wind up waist-deep in the psychic mud and sludge of “Stranger.” And it doesn’t ease up from there. This drone-based sound is thick and slow-moving and often feels over-modulated. It rubs against your skin and pulls at your brain, and you respond to it in a base, visceral way. Cuts falls just to the more listenable side of dark ambient. It’s not, in any definitive sense, isolationist ambient, though you get the sense it wants you to leave it alone. It’s emotionally dark, so it doesn’t get quite into the sort of grinding, screaming grimness of pure dark ambient. It pulls you in rather than pushing you away; it’s up to you whether you stick around for it. DiBenedetto relents a bit toward the end. “Columns” is built on a hornet’s nest drone, but the tone feels lighter than everything before it. The closer, “Stacks,” comes in with a very surprising flute-like note and light, rising swirls of sound, totally out of character with the rest of the disc but perfectly placed as a reward for the effort. (Worth noting it also shows that DiBenedetto can do more than lean angrily on a keyboard.) With this soul-washing final track, Cuts finally lets go. The question becomes, do you go back? I imagine many won’t unless their tastes run dark to begin with, but the initial voyage, hard as it gets, is worth the effort at least once.