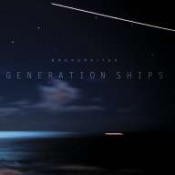 Perched comfortably between electronica and electronic post-rock, Brokenkites’ new release, Generation Ships, pumps along with cool charm and infectious hooks. With James Willard at the helm, the disc works its way through spaces both loungeworthy and darkly intense, powered by insistent beats and a sense of narrative in every track. This isn’t another round of rampant glitch-stitching; it’s solidly constructed IDM that resonates with hints of early 90s electronic music and classic electro-pop. Willard handles his shifts with ease; he’s as comfortable laying down the laid-back, storytelling feel of “Galactic” or the abstract, pared-d0wn tension of “Artifact” as he is charging into the intense, driving potency of “Swarm.” Generation Ships cruises easily along, with Willard finding a new way to keep you grooving in every track. Beats drop in at points apparently timed precisely to elicit head-bobbing in the listener. Once this disc gets ahold of you, it has no plans of letting you go–which you’re probably going to be okay with. Generation Ships is quite worthy of all the repeat listens it’s sure to get.