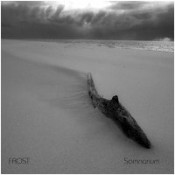 Displaying a warmth that belies its title, Somnarium’s Frost is a 70-minute flow of soft-edged drone mixed with piano, guitar and manipulated voice and radio transmissions. Artist Michael Meara’s stated intent is to capture “arctic vastness and the impact such extreme environments can have on the human psyche,” and pulls inspiration from the written accounts of early polar expeditions. If that’s the case, the resultant music feels less like an impact than the quiet mental wanderings we embark upon when we’re removed from the overloading pollution of too much input and we find ourselves alone in our heads, the internal chatter beginning to clear. The spaces Meara reveals are wide and open, places where the sound of a thought can carry forever. The blend of ethereal wash and earthly instrument is balanced well in every track; listen to the quiet melancholy hiding within “Ice,” the piano reluctantly speaking through the flow. Frost‘s five tracks take their time in describing themselves; only “Nimrod” clocks in at under 10 minutes. Meara spreads his thoughts smoothly across the area he gives himself to work in, carves the sonic landscapes with patience and ease,  and the pieces benefit from it. Frost is both calming and affecting, the way a good ambient disc should be. This is a disc you’ll leave playing for hours at a time.