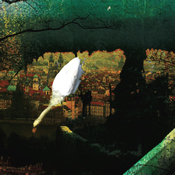 Dubstep’s inherent trippiness gets tuned up and supercharged in the hands of sonic mechanic Mikronesia (aka Michael McDermott) on his new release, Sick with Silence. Break out the headphones for this one, and just let the echo-amped grooves wash over you. McDermott brings the listener in with a long call on the melodica and a backdrop of twiddling electronics to start “Black Rain.” It’s nearly two minutes before a beat fully establishes itself and three before it gets assertive, but once it comes, the groove is on. The main variable in McDermott’s equations here is his use of noise. He runs the gamut from lightly augmenting tracks with low-volume crackles to unleashing all-out waves of static-loaded bliss. Distortion plays a big role here as well. All of it, however, perfectly supports his smooth dub intentions. “Smuggler” is a great example, a fully packed bowl of smoky goodness with guest Erb Blazer rocking the mic with rhymes. Here again walls of electronic sound fill the space. (We’re back to the lyrical poetry on “What What” with John Morrison hitting high speed lines.)

Along with the well-formed dub, McDermott also offers his usual array of tormented sound. “Porn Anchor” is a dark, twisted vehicle for a melodica that seems to have lost its way. I also like the spooky confines of “Contourist,” where glass-bottle notes ring out against mechanical pulses, and the tonal identity shifts at work in “Moon Pebble.” McDermott closes with the glitchy, random sounds of “Calm Intent,” which borders on minimalism with its dense repetition and surprising simplicity of construction. The last three minutes of this track break down to a steady electronic pulse-beat fringed with noise at the edges. It reminds me, in its blend of  flow and beat, of DAC Crowell and Kurt Doles’ “Rain Forest Garden,” one of my all-time favorite ambient tracks. Great ending piece.

And the bass…oh, the bass. Throughout Sick With Silence McDermott lays down spongy, meaty basslines you can practically reach out and touch. Just listening to the thick, resonant low end on “Ketut” made me want to run out and drop good money on the biggest subwoofer I can find. It keeps the pieces very true to their dub heritage. And just happens to be groovy as hell.

Sick With Silence clocks in at under an hour, but it’s the sort of CD that takes its time in your head. Firmly sound-packed and engaging enough to make sure you run it through at least a second time. A great outing from Mikronesia.

Available from the Mikronesia web site.