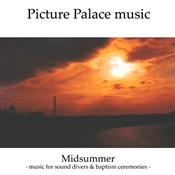 We reviewers like to try to classify things. It just makes the reviewing life easier. Then along c0mes a disc like Picture Palace Music’s Midsummer, stubbornly refusing to be put into any one slot, and we scramble for the right words. In this case, the right word is: fantastic.  Over its ten tracks Midsummer touches on melodic electronica, IDM, prog, synthpop and even a bit of Enigma-esque chant. Lead by Tangerine Dream’s Thorsten Quaeschning, who created PPM “to reproduce the musical dynamic and experiments of old live accompaniment for silent movies,” Midsummer is one of the most infectious discs I’ve heard in a while. If you want to be hooked immediately, head straight into “Midsummer’s Day.” Going from standstill to 60 in the space of a heartbeat, it wraps a catchy, hyperspeed rhythm and melody around a poem by Ralph Waldo Emerson, sung through a vocoder. Not cool enough for you yet? Let’s add in a guitar riff that pops in out of nowhere to hook you, and then layer on what to these ears sounds like a chorus of football fans singing an anthem from the stands. You may find yourself joining in. I simply can’t get enough of this piece. Which is not to discount the rest of the disc. As noted, Quaeschning, backed by up to six musicians, mixes up tone, temp and approach track by track to keep everything fresh. “Midsummer’s Eve” is an aggressive, guitar-heavy rocker–Quaeschning is joined by axe-men Djirre and Stephen Mortimer–that comes off with a certain spy-movie-soundtrack flair. “Seduction Crossing” is Quaeschning alone with synth, lap-steel guitar and a couple of tubular bells; the resultant feel is exactly what just came into your head–a sequencer-launched mix of classic  TD structure with a shot of Oldfield. The guitar wails that come in around the 3:40 mark are like an extra boost of adrenalin. The three-part suite “Drowning Someone’s Sorrow Into the Ocean” begins as the most ambient piece here, opening in Part I with shadowy drifts lightly punctuated with an electronic pulse. Part II, the longest track on the disc, immediately takes up the pulse and elevates it, moving off into recognizable TD territory, polyrhythms arcing back and forth across the sound. Part III melts into chant and stronger, neo-tribal percussion (the instrument list includes stones and “boomwhackers”). There’s a great stretch beginning at the three-minute mark where the percussion takes over almost completely, just a whisper of a drone sliding beneath it and fading, and it’s absolutely hypnotic. Masterfully, Quaeschning polishes off the disc back in IDM territory with “Midsummer’s Night,” recalling the structure of the earlier “Midsummer” pieces, wrapping them around a sextet of lines from Shakespeare and giving it an 80s synthpop flair. (There’s a metallic flange bouncing around in spots; I won’t tell you which 80s dance hit jumps into my head when I hear it, but I’m willing to bet you hear the same. It’s that recognizable.) With this piece, Quaeschning ensures that our Midsummer ends on a very high note, leaving us energized, cleansed and alive, ready for more.

Midsummer is, beyond doubt, a Hypnagogue Highly Recommended CD.