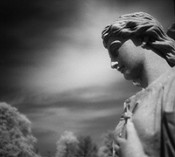 Because I first caught the electronic-music bug in the 70s and early 80s through artists such as Tangerine Dream, Jean-Michel Jarre and Kraftwerk, the truth of the matter is that any musician now doing sequencer-based, Berlin-style music (and doing it well) pings my nostalgia button and therefore has a bit of a thumb on the scale when it comes to a review. Chuck van Zyl is certainly a well-known name in this genre, a talented artist who keeps the old-school flame burning both as a member of Ministry of Inside Things and on his own. His newest release, Memory Space, hits all the right analog buttons (or knobs) as he lays down fluid, flute-like melodic contrails over precise and perfectly constructed sequencer runs. If you’re not into this largely retro style, Memory Space may hold marginal interest for you, or even seem limited. However, van Zyl mixes things up as best one can, given the base equation of a very angular, clockwork bottom end and the artist’s particular melodic style (which, let it be noted, I’d gladly listen to all day) and he does steer his musical musings from that classic framework and off into spaces that are darker and more experimental. In fact, the disc starts with the abstract piece, “Time,” where skeins of analog sounds spiral off into a whispering void as an ominous bell peals. van Zyl smoothly segues that into the crystalline arpeggios of “All Souls’ Day,” and as he lifts choral voices out of his gear, we find ourselves in that sonic sacred space, paying tribute to Froese and Schulze and all those who crafted the path. Between these two tracks, one gets an understanding of the balance at work on Memory Space. The centerpieces of the disc are three long tracks that give van Zyl the room to really stretch, explore and showcase his mastery and love of this style. “September Cemetery” is the first, and it helps to re-express the balance by opening with clouds of warm ambient chords and a bounding melodic line that puts me in mind of early Giles Reaves. (In fact, it just came to me that the echo I’m hearing is from Reaves’ Sacred Space.) “Marble Orchard Nocturne” lacks only Art Cohen’s guitar to make this a picture-perfect MoIT track. The energetic sequencer is a van Zyl signature, and his free-form playing absolutely soars here. Not to throw an endless stream of reference points at this disc, but this one puts me smack in the middle of Tangerine Dream’s Sorcerer soundtrack–an album that was absolutely influential on my appreciation of the Berlin style. Late in the track, van Zyl seamlessly downshifts to more vaporous drifts, and the effect is mesmerizing and soothing. “Stories in Stone” begins in an interesting space, with blocky notes stepping precisely, if not a bit mechanically, over choral voices. After a few minutes, van Zyl sends the whole thing flying, high and clear, and never looks back. This one is pure Chuck van Zyl–no comparisons are needed. In this I hear the playing that has made me an MoIT fan, the keyboard soul of the duo. The tracks between these longer pieces are not to be ignored, by the way; they’re equally rich in character, diverse and perfectly constructed, parts of this very effective whole.

Memory Space overflows with the sound of a musician who loves what he does, and loves where it came from. van Zyl’s sequencer work in unparalleled, a rock-solid geometric foundation, and the depth of his inspiration comes through in every note. For listeners like me, who either came to electronic music via these sharply modulated channels or those who like their music with a slight retro edge, Memory Space is a must-hear disc. And if you’re not familiar with the Berlin School, take a listen. Chuck van Zyl has crafted a superb primer on the subject.