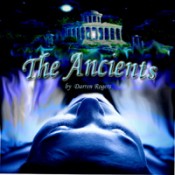 On his newest release, The Ancients, Darren Rogers weaves a musical tale of the “lost knowledge of Atlantis.” The story spills forth in four fairly long tracks, the shortest just shy of 10 minutes, for a little under an hour’s worth of calm, sighing, melodic music. Truth is, The Ancients doesn’t really need the ostensible theme to work. My first listens were made free of that context and I liked what I heard; no deeper sense or insight was gained through knowing Rogers’ narrative intent. The opener, “From the Stars,” is the longest track, a lush and graceful flow of soft chords with an undertone of approaching sadness. A very nice ambient work that stands on its own. Rogers appropriately layers some drama beneath his drifts on “Utopia Lost” and carries it easily into “Celestial Voices from the Heavens,” where the composer makes strong use of a vocal sample, coming like the voice of a lone Atlantean singing in prayer. To me, this track starts a bit uncertainly but levels off a few minutes in. Towards the end Rogers gives it a distinct spacemusic feel. I can’t decide if the closing/title track starts out with the sound of panicked voices–which would make sense if Rogers is ending his story with the ruin of Atlantis. It’s a little distracting but, like the track before, this one eventually smooths out on a bell-tone melody that gives way to starry, pensive pads.

All in all, The Ancients is a solid piece of work that hovers on the border between drifty ambient and deeper spacemusic. Well worth a listen.